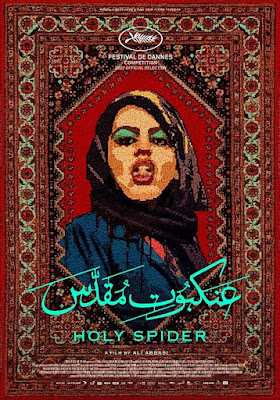 I was hoping to write about Holy Spider today but a couple of screenings have sprung up that I can't miss, so that's not going to happen. But let me briefly point you in its direction -- this is the new film from director Ali Abbasi, whose wackadoo weird film Border from a few years back (about troll people finding love) knocked my socks off. It's telling the true story of a serial-killer in Iran who murdered prostitutes and who used the defense that he was cleansing the streets of corrupt women in order to do it. It's a deeply upsetting film but very much worth seeing -- and how killer is that goddamned poster above? So good. One of the posters of the year, for sure. Anyway below is the trailer -- whenever you have the opportunity to see this film see this film. It's the thorniest and most challenging serial-killer movie since Zodiac. Not to mention how timely it's become, given recent events in Iran.
Who? Jason Adams When? 12:19 PM
Labels: horror, trailers