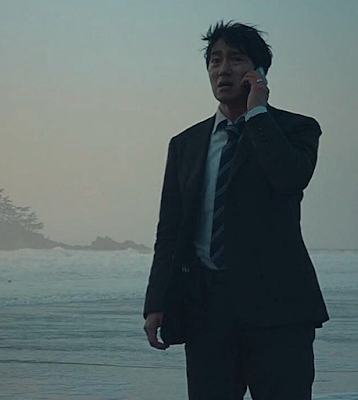 I'm always hesitant to use the word "masterpiece" when discussing a film any less than several years old -- it just seems like a word that needs real time and thought and distance to assert itself, you know? It doesn't seem right to me when people walk out of a movie and before the popcorn's unstuck from their heels they're screaming "Masterpiece!" left and right. But I'm extremely tired today so I'm being lazy and reductive and using that loaded-to-my-mind word to sell you on just going to see Park Chan-wook's latest film Decision to Leave, which is out in a few select theaters this weekend and is very very very good. Basically if you're here in NYC you've got options on seeing the movie -- it's at the Angelika today and it hits FLC on Wednesday -- and I recommend you do. Here is my review from TIFF (the trailer's also at that link) -- I wrestled some with the movie, both while watching it and after, but here a few weeks on it's lodged itself happily, firmly enough into my consciousness that I feel pretty justified in using that word. It's right up there among Park's best and as soon as I have time I plan on seeing it a second time -- it really feels like one that will unfurl in a whole new way the second time through. Which... basically like every Park movie does.