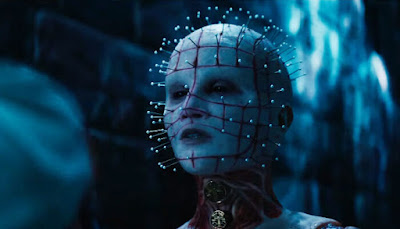 I would love to have more time to write about this one but they went and dropped its release in the middle of NYFF and I've got too much else going on. But here are my deeply abbreviated thoughts on the new Hellraiser (which hits Hulu tomorrow): it feels as if everyone involved with its making has never had a truly transgressive thought in their entire lives. The cenobites look cool and pose cool (Jamie Clayton is very cool) but the absence of nearly every single character on-screen for 90% of its runtime seeming to have no interest whatsoever in kink, in S&M, in a Hellraiser movie? That's painfully unforgivable.

Tossing in a gay couple who lay chastely in bed next to each other does not make this movie queer. This is a well-made Slasher Movie where the Cenobites pop out and torture people gruesomely every so often, but I wanna feel Hellraiser under my skin. Clive Barker sticks pins into nerve endings for your body to have all kinds of confused, conflicting emotions in response to, and there's nothing here that does any of that. Pain is never anything but pain -- where's the damn great deviant pleasure in it, Hellraiser? This movie is all pain, no pleasure. I'm hesitant to say this movie is puritanical but I don't think a longer exploration of its tendencies in that direction would be remiss. Make Hellraiser queer again, dammit!

I figured it would be dull and neutered when I saw the trailer. Pinhead is not menacing and the effects look cheaply done. Practical and CGI, needed a lot of work to make it more realistic. Part of Doug Bradley's menacing was his deep voice effects. Lady Pinhead feels like...a Halloween costume.

I propose a new title for this crap- Saw: Poor Wittle White Girl.

That's all we really need to say about this. Between this and Hocus Wokus, I'm quite done with hollywood. Halloween is canceled this year. See you on Turkey Day.