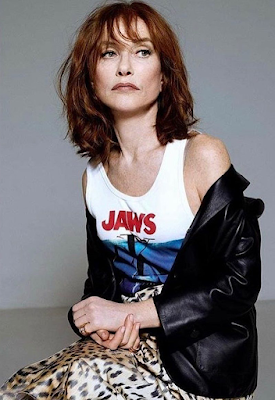 Okay first things first where has that photo of Isabelle Huppert wearing a Jaws tank-top been my entire life??? I want to make myself a t-shirt that has that photo on it, that is how much I love that. Second things second -- have y'all heard the news that Huppert is supposedly going to star in Dario Argento's next movie? That's according to Dario, who said so at the Stiges Film Fest where they're screening his latest giallo film Dark Glasses -- I briefly reviewed DG at Fantasia in August, read my thoughts right here. It's a little goofy but it's by far Argento's best film in literal decades, so this news about Huppert hits me in a mood more inclined to believe this could be incredible than I might have before when he'd only had a steady string of hard flops behind him. Not that Huppert is capable of being anything but fascinating on-screen -- even in bad movies she's always riveting. But let's hope this one (which we have no information on yet) works! That would be nice for Argento, it'd be nice for Huppert, and it would be nice for me personally, which is the most important factor of all. Anyway in related news Dark Glasses is playing a few theaters right now (including the IFC Center here in NYC) and it's hitting Shudder this Thursday -- here's the trailer:

Jason, Jason, I just X and came here assuming you screengrabbed the crap out of Martin Henderson prancing around in his tighty whities and yet I find nothing? I'm surprised.