Don't go into the woods alone, they said. Don't go anywhere alone, they said! What is the first thing that we always make fun of horror movie characters for doing? Going to investigate a noise by themselves -- the infamous "I'll be right back" thing. Or going to a second more remote location with a sketchy character (like say for example Jena Malone). There is safety in numbers, we've long been taught -- hell that's basically the entire credo of civilization itself. And Indonesian genre king Joko Anwar's delightfully deranged Satan's Salaves 2: Communion, which just played the Brooklyn Horror Fest and which is premiering on Shudder here in the States on November 4th (after raking in blockbuster bucks in his home country), just shredded that whole damn idea to ribbons.

Anwar's first Satan's Slaves film from 2017 (itself a remake of the 1980 Indonesian classic from director Sisworo Gautama Putra) introduced us to a rural family of Mawarni (Ayu Laksmi) and her husband Bahri (Bront Palarae) along with their four children -- the eldest and most responsible Rini (Tara Basro), the teenager Tony (Endy Arfian), the pre-teen Bondi (Nasar Annuz), and the youngest, Ian (M. Adhiyat), who was deaf. By that film's end Mom was dead and little Ian had been whisked away by a Satanic cult and the family had high-tailed it out of the nowheresville village they lived in to the safety of the city... or so they thought!!!! And yes you should insert a thunder clap there, in case those exclamation points didn't make that perfectly clear.

Several years on and the family has settled into their little corner of a massive brutalist high-rise building that's stuffed to the gills with the blessings of other people. It might not be luxury accommodations -- it's really a bit of a run-down slum -- but the kids all have tons of friends and there's comfort to be had in numbers. Especially when the isolation of the first movie turned out so poorly for everybody involved. Sure, the fact that the elevator sputters and creaks when it gets overloaded with all of these blessed people is a bit unnerving, but the alternative... well that's how your little kid kidnapped by satanists, am I right?
As Anwar proved with the two horror films he made in between these Satan's Slaves films -- Impetigore (which he wrote and directed) and especially The Queen of Black Magic (which he only scripted) -- he's an ace at juggling a pile of characters, and Communion finds him at the top of his game with this. Besides the entire family at our film's center there are reams of new people to get to know here, and he does so with astonishing ease -- by the time the lights go out and the horrors begin piling up up up as high as the high-rise goes we feel like we know all of these folks, at least enough to be scared for them anyway.
Because, as the title makes clear, this movie isn't gonna be community gardens and bake-offs. It turns out there's no slipping through the crowd from a curse -- that darned curse is gonna curse up everybody you try to stack in its way. And there's also the fact that with this many neighbors you can't get to know everybody -- indeed who knows, knock out one brick between you and the couple next door and who knows what you might find. Photos of your dead mother, maybe. Wouldn't that be weird...?
Basic gist: if you're not keeping up with the horror movies of Joko Anwar and the folks he's working with then you're missing out on one of the great treats of our time, and his Satan's Slaves sequel only further cements that status. As the major vibes of U.S. horror slip away from the artiness of so-called "Elevated Horror" into an embrace of sloppier, goofier, splashier stuff -- even though I wasn't a fan James Wan's over-the-top Malignant is a harbinger of where we're headed, I think -- we can just glance over the ocean to somebody who's been acing that vibe for half a decade now. These movies are seat-jumping funhouses full of chaos and over-the-top terrors, and this one's as big a blast as any. 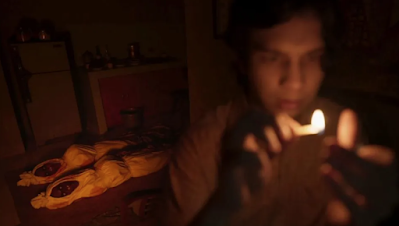