I very well couldn't do a series called "The 13 Toilets of Halloween" and not talk about The Toilet To End All Toilets (or rather The Toilet To Begin All Toilets) -- the scene of Marion Crane flushing ripped up pieces of paper down the Bates Motel commode in Alfred Hitchcock's 1960 film Psycho. Long heralded as The First Film To Show A Toilet On-Screen, although the internet has apparently shattered that myth -- Reddit is telling me that we see a toilet in King Vidor's 1928 silent masterpiece The Crowd, and that we see and hear a toilet flushing in the 1930 comedy Going Wild. Take that, Hitchcock! Toss Psycho in the garbage can, I guess! Or rather...

Anyway to make this post slightly more interesting (since what else is there to say about the goddamned toilet in Psycho) I re-watched Gus Van Sant's 1998 color pseudo-shot-for-shot remake of Psycho last night just to see if he did anything interesting with The Toilet in it and -- he does not! Lucky us. I got excited for a second because it looked like there were a couple drops of blood (I was praying it was blood anyway) on the toilet seat, but my boyfriend insists they are simply marks from those little protective nubs that keep the lid from slamming down too hard? You can make up you own minds on that. In summation...

... here is a gif of Vince Vaughn's Norman Bates jerking off at the peephole while watching Marion change in her room. That was always my favorite update from Hitch's film to Van Sant's -- just the blunt crudeness of it makes me laugh, and I think it would make Hitch laugh too. Would he have done that if he could've gotten away with it, you think? I can't decide. So much of what makes Hitch's films last was the restrictions he was forced to work around -- the sleaze is there, but you have to lean in to get it. Now if somebody remakes Psycho again they'll probably have Norman shoot ejaculate right through the peephole the next time. In 3D! Gaspar Noé's Psycho, lol. Dare to dream. Actually Karl Glusman (who did indeed shoot ejaculate for Noé already in his 3D porn film Love) would totally make a good Norman, now that I think about it? 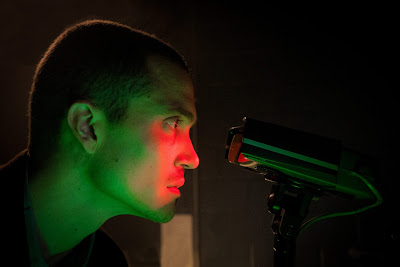