You know those flashback episodes of The Golden Girls where they'd sit around eating cheesecake and tell stories and then we'd see flashback scenes from earlier episodes? Doesn't it feel like there were five of those lazy episodes every season of that show? What the hell were those writers doing that required so much time off? I'll tell you what they were doing. They were doing cocaine. They were sitcom writers in the 1980s anyway, so one assumes. Anyway that's what this post in our "13 Toilets of Halloween" series sort of is today -- it's Saturday and I have other things to do dammit. So I'm going to link you up with a couple of old posts that I've done here at MNPP that fit our theme. And this isn't really a cheat because these were two of the scenes that first popped into my mind when I decided on this theme. I mean I could have technically written new posts about them but... cheesecake. Just think cheesecake.

First up click here for my "Ways Not To Die" post on the 1987 classic Street Trash. This was literally the first toilet scene in a horror movie I thought of for this list, but then I realized I'd already posted it, and here we are. This movie is such a blast, I love it so very much.

Next up there's the scene where a woman gets killed on the toilet in Psycho III, which I previously posted about right here -- one imagines that Anthony Perkins (who directed Psycho III) was looking to one-up Hitchcock's toilet shot, which we talked about earlier in this countdown. Psycho III reads like a laundry list of one-upping Hitch in a lot of ways, specifically with the sleaziness, and I totally dig it for that. 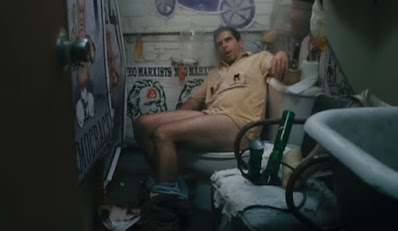 And finally, funny enough I have done a post about movies and toilets before! Nobody call my therapist -- I really don't need anybody going all Freud on me about this. Anyway click here for a gallery I gathered up in 2010 of some memorable toilet scenes in movies. One of the shots that you see therein will actually be showing up here in this countdown tomorrow! Can you guess which one?