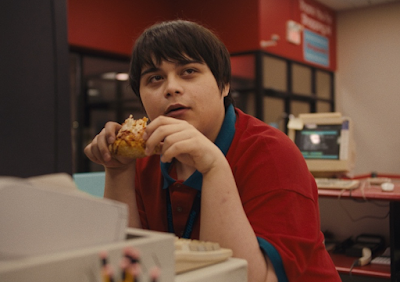 My first job was working at a grocery store, and I got that job just so I could work in the video department. It was every 90s movie nerd's dream thanks to Quentin Tarantino, and after a year of pushing carts and getting up at the ass-crack of dawn to boil bagels I finally worked my way into that shining little corner of the building all walled with beautiful VHS cases -- dreams do come true! I still look back on that time fondly, where I would zone out watching The Nightmare Before Christmas on a loop for eight straight hours, and so I felt the story and the character at the core of Chandler Levack’s feature film directorial debut I Like Movies pretty deep in my bones. This is like Clerks but competently made!

Set in 2003 (about a decade after I'd had my own fun bending time and space to watch all the free rentals I could physically manage), I Like Movies stars Isaiah Lehtinen as our hero, oft-anti, Lawrence Kweller -- aggressively film-bro at first, Lawrence does take some getting used to. He's the sort of dude who'll go out of his way to convince an exhausted pregnant woman that the light entertainment she's looking for is Todd Solondz's Happiness, and if that don't ring true to yours truly I don't know what would. And also literally exactly like me (for real there are serious weird ways in which this movie reads as biographical of my own nonsense) he's hell-bent determined on getting into NYU's film school, finances be damned.

Up until the movie starts Lawrence has been perfectly happy to stand around the video-store offering up his opinions for free, but now with this financial incentive he applies, and gets, a gig behind the counter. I too remember that first peek behind-the-curtain at my own little video department, seeing how the "magic" was made, and like Lawrence... goddamn it's dispiriting. Oh you mean these are just people, not magicians? Some of them don't even like movies? First jobs, even if they're shitty (and lord knows they usually are) are revelatory in their own way -- finding our own footing we suddenly find ourselves interacting with strangers, adults, outside of school and family. The world opens just a crack up and all our childish awkwardness is forced into the light. Now you must figure out how to talk to people without Mommy around, little boy!

Anyway the coming-of-age arc in proto-troll Lawrence's story, sidling up so close to my own as it does, absolutely charmed and captivated me -- I saw too much of my own bumblings in Lehtinen's fine performance, and the movie as delivered by Levack (who also wrote the script) knows exactly how much of Lawrence's bullshit to cut through, and exactly how much empathetic allowance to let him have as well. It rings honest and true and often very funny, and the entire cast, all bright lights, gets to partake in the whole of that. Very special mention to Romina D'Ugo who plays Lawrence's kind but exasperated store-manager Alana, the bearer of most of his bullshit -- the two actors form a totally credible bond and their scenes sing, and she knocks a monologue about her own dreams going poof right out of the park. This is a truly heartfelt little gem. 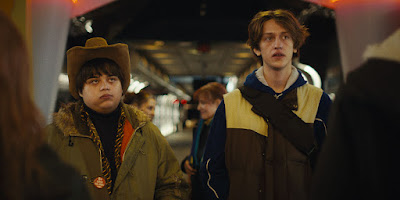 Kudos for a glorious review from a fellow bagel-baker and movie lover.

Was the CLERKS dig necessary?
From Wikipedia: It is often regarded as a cult classic and a landmark in independent filmmaking. In 2019, the film was selected for preservation in the United States National Film Registry by the Library of Congress as being "culturally, historically, or aesthetically significant".
I don’t feel the need to knock down one thing to elevate another.
Maybe if CLERKS had been “competently made,” it wouldn’t have the longevity it’s had.

jimmyd is that you kevin? 😆

Any opportunity I have to take digs at Clerks (and its sequel by extension) I will take. All the digs I have taken still haven't added up to the time those awful, awful movies stole from me.

And no I won't be seeing the third, in case that wasn't obvious ;)