TIFF Review: By 'Aftersun' It's Too Late Already 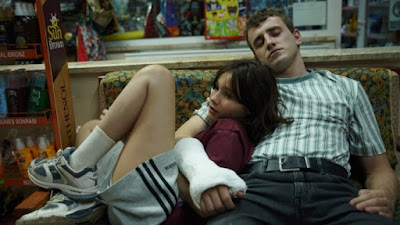 Fasten your favorite eye-sieves on because baby's got a brand new and bracing tearjerker for y'all with Aftersun, the tremendously lovely and also quite devastating feature-film directorial debut from Charlotte Wells. It's playing TIFF this week, and it stars in its co-lead Paul Mescal, alongside Paul Mescal's Legendary Big Sad Eyes. Here Mescal is Calum (he will eventually cycle through all of the prototypical Irish Laddie names, no doubt), the über-young Da to the adorable eleven-year-old Sophie (Frankie Corio).

Mescal, who's really only 26 in real life, is playing slightly older here, as Calum's recently turned 30, and the film wields Mescal's creamy youth in one hand as an immediate signifier that this is all a lot for Calum -- why, he's a mere boy himself! Babies raising babies! And in the other hand the film wields Mescal's old sad eyes to drag that disconnect on even further -- Calum might be a wee babe, but he's a worn-down one all the same.

If you've previously seen Paul's wowza performance in Normal People this will all sound familiar, as that series leaned hard on these very same facets of his face, which is somehow young and old all at the same time -- indeed I think that Aftersun is very much hoping that you have seen Normal People, because the tension that that series engineered into Paul's presence works like shorthand, watching him here. We see him and we worry. Well I don't know about you but I do. 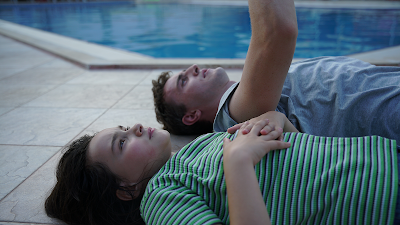 And that instinct serves Aftersun incredibly well as it meanders along -- "meander" might sound judgmental from certain angles, but I mean it with love; this is a patient film, more inclined to soak in the details of Calum and Sophie's relationship, inch by inch, and slowly suss out its tensions without stooping to histrionics. It's only slowly that we begin to sense something inside of there is amiss, and by that point we're spotting the details in every corner of every frame.

The plot, as far as that goes (this is not a plotty movie), is that Calum has taken Sophie from her home in Edinburgh to a seaside resort in Turkey for some quality time together after breaking up with her mom and having moved away to England. The two's time together is limited and they're doing all they can to cherish it, even as little pains seep in -- Sophie doesn't seem to understand what happened with her parents, and Calum is desperate to make this trip memorable for the girl he quite clearly adores. Everybody mistakes the two for siblings as they splash around in the pool, both relishing the experience with an enthusiasm that at times feels a little forced, but only with the best of intentions.

But as the days pass the mood grows a little more confused and conflicted between the two, and that's before flashes of an older version of Sophie start weaving their way into the narrative, and we realize we are indeed looking back on a memory, elusive as the tide. A melancholy floats an inch above the surface -- the water sparkles a little too bright, that diamond sheen that's gone right before you can grab it.

And once Aftersun's got you in its grip it's gonna squeeze. The last act of this film held me so tight I was shaking -- I think anybody who's found their relationship with their father fractured will feel this film like a tidal wave across the face. I don't care if this is a bit of typecasting with Paul Mescal, he's so good at it -- watching his naked back shake with sobs with shatter you without even needing to lean on those eyes of his. And Corio's a keeper find, meeting him beat for beat. What a total heartbreaker! 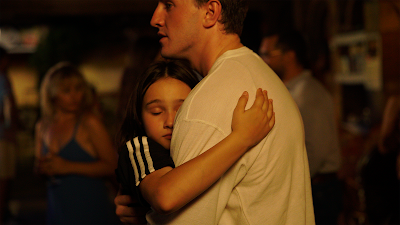