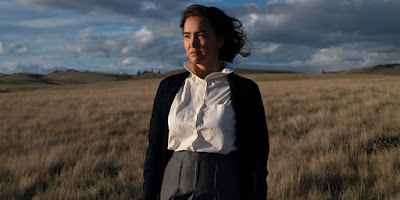 Spanning an entire century charting the lives of one family of Cree people and the traumas they endure at the hands of their Canadian countrymen, Marie Clements’ moving and enthralling Bones of Crows attempts to do for those Indigenous folks what other cinematic epics like Heaven's Gate or Once Upon a Time in America have done for other groups of people -- set a center focus upon which the entirety hinges, giving us a Forrest Gump like view of history as it spins around and weaves through the middle of their lives. And it does so pretty damned well, I thought!

I hear the film is only the beginning and this is going to be expanded and turned into a miniseries event from here for Canadian television, and one can already sense there's much more to tell at its edges -- Bones of Crows mainly focuses on Aline, the eldest daughter of the Spears family, but you can see how every branch of this tree has a much bigger tale to tell. Even if it's simply a case of the storytelling and performances being so rich in this abbreviated film version that it simply out hints at all of those complex untold stories, that's gold star experience enough for the movie we already have -- that these people feel multi-layered and inexhaustible in fascination is the exact opposite of a problem. We might get those stories told down the road but the film's nudges toward a broader scope is already damned fulfilling.

The main character of Aline Spears is played by three actresses in the different periods of her life -- Summer Testawich for the start, Grace Dove for the middle, and Carla-Rae for the end. Naturally we spend the most time with Middle Aline and so it's Dove we're gifted most of the film's runtime, and what a gift. What a face, a presence. She grounds the entire epic, the hub by which all else spins. While the darkness that youngest Aline goes through at the "residential schools" -- a Canadian tradition where Indigenous children were torn away from their parents and "re-educated," leaving behind mass graves in the process -- echoes and reverberates out across her entire life, it was the film's passages under Dove's care, her romance with a fellow Cree named Adam (Phillip Lewitski) and their problematic lives together, that hit me the hardest emotionally. And a lot of that's due to Dove's astonishingly open face, a wonder to watch.

Even if Bones of Crows isn't quite mini-series length yet it feels in this form overarching, it feels total and whole, and the weight of all of it might wash over you at the end like it did me -- I was an emotional mess by the credits. You really feel like you've lived these folks' lives, walked in their shoes, and been fed the empathy needed to stop letting stories like this go untold for infernal ages. The bodies our forebears have trampled over and buried will wait as long as it takes for us to speak their names, and will haunt us every step of our ways, our children's and their children's ways, until we do just that. There is no freedom for one, only all.

There were no "mass graves". Stop spreading hate propaganda.