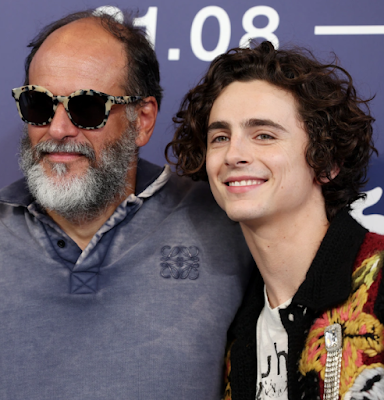 In case you thought whisper silent nails had been pounded in the coffin lid of a Call Me By Your Name Part II: The Peach's Revenge happening well director Luca Guadagnino has other ideas! He was asked at Telluride this week where he screened his Bones and All with Timothee Chalamet about the possibility of a sequel again, for the two hundredth time, and he's still saying it could happen. Of course he's been saying some variation on this for going on five years now -- here's basically the same thing in 2018. He usually brings up the "Antoine Doinel" movies of Truffaut's, all following the character played by Jean-Pierre Léaud over the course of twenty years. Which I guess if you're gonna go for it go for the moon!

I know how much you love CMBYN (so do I) so sorry for saying this, but anything that keeps Luca from doing the remaining three mothers films is not-so-hot news to me :(

Oh believe me I would LOVVVVVVE another Suspiria movie! Love love love that! But I have even less faith in that then I do a CMBYN sequel, Suspiria was murdered by Amazon's release and I think is still considered a failure? But yeah BRING IT ON, I want that too

I feel like he is not the greatest at picking projects that best exhibit his strengths. While I enjoy most of what he does, there's always a question mark in the back of my mind. Why bother making a film like A Bigger Splash? It felt so unnecessary when you look at his filmography. Suspiria also feels like a diversion, as good as it was. Maybe I'm just not seeing the big picture yet because he is still relatively new to directing features. Btw Find Me is listed on his IMDB page. No date, but it's there.

If we're recasting Oliver, I hope he goes for a younger-looking actor like it was supposed to be from the beginning. I think what threw a lot of people off from the movie was Armie lookine 30+ and not like a guy in his early 20s.