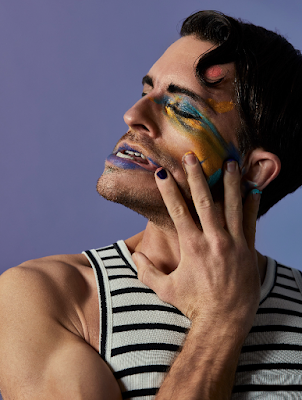 My interest in the two-part movie-adaptation of the Wicked musical just ticked up from negative 25% to perhaps... maybe... 25% positive (?) with the news that the delightful hot and gay Jonathan Bailey's joining the cast -- he's playing the role of "Fiyero" which is a good sized role right? I have clearly never seen Wicked on stage -- I have better things to do, like cry in the corner of my bedroom, thank you very much. I have heard that Jonathan is a talented singer though, which clocks given he's a Laurence Olivier Award winning theater homosexual from way back. But I've never seen him sing myself. If Jonathan wants to come sing to me I will allow it. Anyway Jon M. Chu who did the not-my-bag In the Heights musical is directing, while Cynthia Erivo and Ariana Grande are playing Elphaba the Titular Witch and Glinda the pink one, respectively. These two movies, which are obscene;y split into two-parts to torment me even longer, are set to come out at Christmas 2024 and 2025. And I'll let the little ghoul from The Nightmare Before Christmas take it away...

Fiyero is the male lead and romantic interest of the 2 female leads. I'm honestly more interested now, b/c Ariana Grande does nothing for me.

I wasn't a fan of the Erivo/Grande casting but I told myself I would withhold judgment until they cast Fiyero. If he's HOT then most will be forgiven. And thus the theatre gods hath spoken. Whew!

Jonathan Bailey is well cast in that role, but if you have interest in Wicked, let me recommend that you read the book first. It's an outstanding revisionary story, creating a political history of Oz and a lot of the things that make the book so great are left out of the plot for the musical, because people are more familiar with The Wizard of Oz, and don't know this marvelous back story.

The Wicked Witch, Elphaba, may be the Wizard's daughter, but the whole story about Dorothy is that she was just in the wrong place at the wrong time. The only reason the Witch of the East, Nessa Rose, died is that she's in a wheelchair and has no arms, so she couldn't get out of the way of the house. Even this activity isn't what turns Elphaba into a political activist.

It turns out that her favorite professor at Shiz University was a goat, and in the musical he's turned back into an animal, but in the novel he gets murdered. There is so much depth and detail in the book. At one point in the book, Elphaba enters a convent and is unconscious for seven years!

The musical's second act makes a lot of changes in the story, and it's not nearly as effective as it should be. My hope with the movie is, because it's supposed to be done in two parts, that they'll return some of these plot elements to the story. I've read the book three times, and just writing this has made me want to read it again.

Pierce -- I have read the book, but not since it came out. And I really liked it at the time. I went through a big Gregory Maguire phase after that but his schtick got worn out fast. But I should read it again some time for sure, it's been ages. But you're indeed correct that the book would interest me far far far more than this Broadway jazz

His book, Mirror, Mirror, which places the Snow White legend in the Italian Renaissance is quite good as well. I went through a big Gregory Maguire phase myself, in part, because one of his stories was in a collection and I used it in one of my reading groups when I was teaching Third Grade. I struggled to finish the Lion book and didn't bother with the last of the Wicked series. The Baba Yaga book was decent, but haven't read him in a long time. I love musical theater, but was terribly disappointed by Wicked. So pleased it lost Best Musical to a far better show, Avenue Q!

Agree with Pierce... I loved the novel Wicked so much and was hoping it would eventually be turned into a non-musical mini series