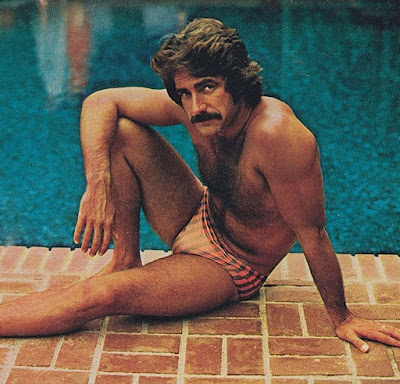 A happy 78th birthday to Sam Elliott and his mustache today -- he thankfully apologized for his dumb-ass comments about gay cowboys and The Power of the Dog that he made last year, so we have in turn forgiven him. At least in so far that I don't feel guilty ogling a vintage picture of him in a speedo, anyway. And that's all that really matters when it comes down to it, right? Anyway y'all know that remake of Road House that's happening with Jake Gyllenhaal right now? The one that finally got confirmed last week? My boyfriend and I were trying to figure out what type of role Billy Magnussen will be fitting into -- I say "type of role" because it's clearly not a shot-for-shot remake, what with the UFC fighter storyline. But I imagine there will be an "adversary to Dalton" aka the Ben Gazzara role and I imagine there will be an "old friend of Dalton" aka the Sam Elliott role, and I was wondering which role Billy Magnussen, aka the biggest other name in the cast, would be slipping into. Guesses?