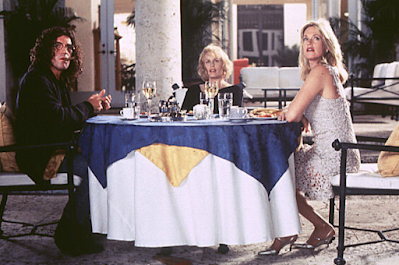 Art: For me there is only Rimbaud.
Liz: Rimbaud? Why?
Betty: Well, it's obvious. He's the original. I mean,
Seagal and Van Damme are just cheap imitations.

There are so many boutique physical media labels these days that are digging deeper and deeper into the release of long forgotten movies on blu-ray, and so last night I conducted a little thought experiment. I cleared my mind -- and I'd love to make the joke that that was easy but my mental illness is actually the exact opposite, and I have far far far too much uselessness bubbling at the top of my brain at every single given moment -- and I thought of a random actor (one that had been around for a long time), and then I scanned their IMDb page for a movie I once knew existed and had completely one thousand percent forgotten about. Just to explore the idea of how even somebody who's been paying incredibly close attention to the movies for as long as I have could have these blinds spots popping up in their rear-view. 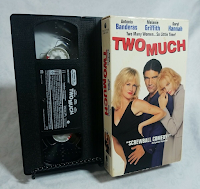 Anyway the actor who popped into my head was Daryl Hannah and the movie I stumbled upon was 1995's romantic twin comedy Two Much, which starred her and Melanie Griffith as sisters both being wooed by Antonio Banderas, who is pretending to be twin brothers so he can have his way with the both of them. The only person who probably remembers this movie is Banderas' ex-wife, since he left her for Griffith while making the film with her. Lord knows I had completely forgotten it until yesterday, but now I can recall the film being popular in the video-store I was working at in 1996 -- I can definitely picture its VHS cover all lined up on shelf after shelf. ("Screwball Comedy!" raves The Hollywood Reporter, lol.)
I hadn't at all intended on posting about any of this, as it was just something I entertained myself with on my phone while I was watching a relatively boring horror movie. But then I saw just now that today is Antonio Banderas' birthday and I felt the kismet of it, I did. Especially when that terrible quote up top presented itself. So happy birthday, Antonio! It also strikes me now that this might actually be a decent idea for a series of posts? A way to revisit movies that have been completely forgotten by time, which seems quaint and kind of impossible now, what with supposedly "everything!!!!" being available to stream right at our fingertips. I mean according to the site that reports such things JustWatch says that Two Much is not available to stream anywhere! What a loss y'all! Does anybody remember this movie? 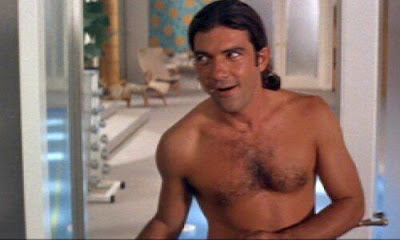 I just remember seeing the VHS box line the shelves of the video store.