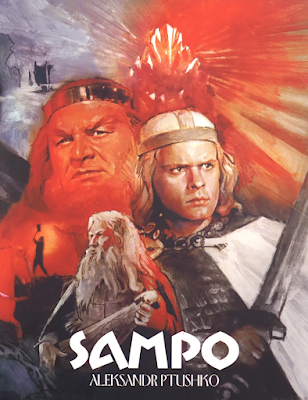 The fine folks at Vinegar Syndrome have now released two of Russian director Aleksandr Ptushko's 1950s fantasy epics onto blu-ray with 1956's Ilya Muromets (aka The Sword and the Dragon) having hit earlier this year, while today comes Sampo (aka The Day the Earth Froze). And I cannot recommend either one highly enough. They're a blast of old-school movie magic -- often reminiscent of Harryhausen and the sword-and-sandal movies of the period, but the fact that we Westerners aren't familiar with the fairy tales and mythologies these stories are retelling gives these films an even weirder and more surreal edge than anything Harryhausen could conjure -- I mean I'm sure these play differently to Russians or those familiar with these stories, but for me I loved being introduced in this WTF way, having absolutely no idea what would happen next. Ptushko's filmmaking wants to go there, wants to surprise and shock, and it sure does, baby. It's a dream.

YO Aleksandr Ptushko's 1956 fantasy-epic ILYA MUROMETS (which just recently got a glorious remaster + blu-ray release from @DeafCrocodile) is now available to rent online!!! This movie's a wonder, do not miss! https://t.co/sh9encG6YR pic.twitter.com/gnoftUK3RP

Anyway I adored Muromets when I watched it back in May but I think I dug Sampo even more, so I highly recommend you hop on over to Vinegar Syndrome and snag yourself a copy of the blu-ray while they're still available. These things really do disappear. (And VS always adds a smart dash of panic to such thoughts by telling us on their site how many copies are left -- as of this writing there are only 385! Eek!) Below is the trailer for Sampo -- any fans of these movies? I hope they keep releasing them, this is a cinematic hole of mine that I've totally enjoyed filling!
Who? Jason Adams When? 1:50 PM
Labels: horror, trailers

I've watched both of these because Mystery Science Theater 3000 included episodes for both. They really are great and I've added "The Day the Earth Froze" to my regular winter holiday movie cycle. I'm glad I'll get a chance to see better prints and their full cuts.