Apropos of nothing actually relevant to this review my grandmother, which is to say my mother's mother, has gone by the nickname of "Sissy" for my entire life. We call her Grandma Sissy. And I have no idea why. It sounds so Southern doesn't it? "Grandmother Sissy has taken her laudanum and retired to the veranda." But we're upstate New York people. Anyway I asked my mother once and she had no answer where it came from. I guess I should ask my grandmother herself -- she would probably know. I assume there's a story there because I know "Sissy" was also the name of the Doberman Pinscher she and my grandfather had when I was a small child -- is my grandmother like Indiana Jones, who we learned in the third film took his nickname from the family dog? My grandparents had two dobermans when I was little and the other one, named King Nicholas Satan -- or "Nick" for short -- bit me in the face once.

But I digress. These are just the thoughts I think when I hear or see the word "Sissy," which probably aren't the same thoughts other gay boys think when they hear the word "sissy." And I should delete the "probably" from that sentence -- if another gay boy hears "sissy" and thinks the ridiculous and very very specific things that I just typed then we've got a whole mirror universe situation happening, and writing a movie review is the least of my worries. Is that what I am doing? I am writing a movie review? Yes I am writing a movie review! The title of this post at least made that clear before I got to the digressing, and digressing, and digressing. The movie is called, funny enough, Sissy, and it's a newfangled slasher comedy from Australia, and it is screening at the Fantasia Film Festival. It's a lot of fun! I am recommending it!

I call it "newfangled" there because the Slasher tropes are getting generously titty-twisted here, upended so you don't really even realize that's what you're in for at first. Although I haven't seen the other two yet I have an inkling that this movie will stand alongside Bodies Bodies Bodies (see the trailer here) and They/Them (see the trailer here) to form an interesting and amusing trifecta of Summer 2022 Queer Slashers that are happily playing with the genre rules in ways Scream did a generation (sigh, we are all so old) before. These movies are actually doing what Scream 5 aka Scream aka 5cream tried to do and failed at (and have I mentioned that my estimation of 5cream has fallen off a lot since it came out? Well it has. I tried to re-watch it and found it much worse on a second go!) 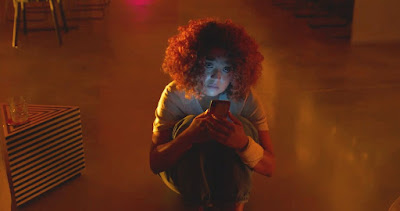 So Sissy stars Aisha Dee (from my beloved Channel Zero) as an Instagram influencer named Cecilia who doesn't seem to have much in the way of friends or family in the real world. She's incredibly popular online where she espouses mental wellness tips to her hundreds of thousands of followers, but at home her life seems anything but well. Dishes are piled up, cold pizza's always on the menu, and calls from her Mom go studiously avoided. The film makes it clear how easy it is to position the small rectangle of your camera's screen to capture the tiniest well-appointed frame, while everything off-screen falls into chaos. And that's even before the bodies start piling up.

One day while running an errand Cecilia bumps into her childhood best friend Emma (co-director Hannah Barlow), who she hasn't seen in ages. It takes awhile before we come to learn what drove these two apart but in the meantime they catch up quick and fall into immediate affectionate old habits -- it's almost like no time has passed at all! Turns out that Emma is about to get married, and after a bachelorette karaoke night go incredibly well for the reunited friends Emma invites Cecilia for a whole bachelorette weekend away. It'll just be Cecelia, Emma, a few of the people who Cecelia met at karaoke... oh and also this girl named Alex (Emily De Margheriti), who knew Cecilia and Emma when they were little as well.

Unfortunately it turns out that Alex was the mean girl bully who tore the two friends apart back in the day -- starting with the nasty nickname of "Sissy" and working out from there -- and if Cecilia had known Alex was going to be there she probably wouldn't have gone at all. But there she is at the middle-of-nowhere house when the gang arrives, and so stuck together for a weekend they are all going to be. And with alarming swiftness Cecilia's online-celebrated spectacle of mental wellness starts slipping, and before you know it... well, let's just say things get messy real fast.

And how messy truly shocked me -- for a movie so steeped in winky outward dialogues about traumas and cancellation-speak Sissy truly revels in gore and nastiness once the time comes for all of that red splattery stuff. Several of its characters would totally cancel this movie! And old-schoolers rejoice, as much of its violence is practical effects -- this movie pops and drips with yuckiness, in the funnest sense. Sissy is a nasty blast, gamely acted by its cast, nimble-footed, clever and mean-spirited to boot. It's also a swell satire of online know-it-all-ism, cutting to the core of how hollow social media can be, and then backing over it for good measure. Point being I had a total blast with this Sissy and I think you will too.