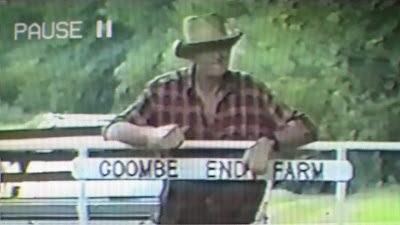 As online as I may be -- and I think we all know the answer to that is "good god dude go outside once in awhile" -- I'm terrible at keeping up with the world of memes and viral sensations. Just terrible. Yes I'm on Twitter constantly but I don't know what people are talking about half the time. I suppose it's this unwieldy narcissism of mine, but I tend to make of this world wide web my own little world, my innie turned outie -- I'm so busy barfing up my own bottomless bullshit that I don't have time to keep track of everybody else's.

All that is to say that everything about the found-footage doc A Life on the Farm, which showcases the home-movies that a now-deceased farmer in England named Charles Carson made about his life on his rural farm in the 1980s was new, fresh, and a surprise to me, but the doc makes it seem as if some of this footage was a pretty big deal on the internet not too long ago. As if people will recognize Charles Carson as a meme-maker of recent making? Basically I'm just trying to get out of the way of my own ignorance here upfront, but then when isn't that the case.

So perhaps Charles Carson's eccentric (to put it mildly) videos are known to you, or perhaps like me before watching this movie you had no idea -- either way I think I can say with hearty enthusiasm that this documentary is an absolute pleasure, a revelation, and I recommend it thoroughly to one and all. I will admit that I've gotten a little tired of filmmakers injecting themselves into their documentaries but here director Oscar Harding has good reason, as its his personal connection to the farmer (who was a friend of his grandfather) that sets this mystery rolling -- when he was little he saw one of the videos and it haunted him for years, and once you start seeing what a character Carson was you'll understand why.

Equal parts funny and shocking, A Life on the Farm is an essential document of an unremarked upon life that deserved a second, third, and fifteenth remark. That art belongs to everyone, and it will bubble itself up in the weirdest of places. There's no keeping true creativity down -- like dinosaurs, it will find a way. And the film also acts as a fascinating time-capsule of the concept of time-capsules -- at one point somebody wonders how Carson would have embraced the internet, and you realize that had he lived two decades later Charles Carson would be writing a blog right here alongside me. We're all Charles Carson now -- weirdos hyper-documenting our weirdness because somebody somewhere must know. Must feel it too. Oh I feel ya, Charles.