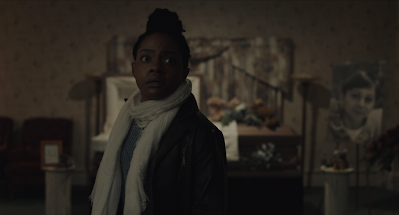 I don't know how many pandemic movies have made their way out to the general public at this point, but as a person who sees lot of films at film festivals and on screeners I have seen more than my share, more than any single person's share, of them in the past two years since COVID wreaked its havoc on every aspect of our lives. Or so I thought I had -- it turns out that there still was a smart and unsettling horror movie to be mined from this most modern anxieties, and director Andy Mitton managed to harness them into The Harbinger, which just screened at this year's Fantasia Fest.

Monique (Gabby Beans) and Mavis (Emily Davis) are friends from way back, but they haven't spoken or seen each other in some time. Indeed after months of the pandemic raging neither of them have seen or spoken to any person outside of their quarantine bubbles for some time -- a situation that's working slightly more in Monique's favor since she at least lives in the country and has her father and brother to keep her company. Mavis isn't quite so lucky -- she lives in the city by herself, and her neighbors (especially an anti-masker next door) seem mostly like cretins.

And that's hardly the worst of it. Nightmares have taken a hold of Mavis -- ones that seem to keep her in their grip for days, where she's no longer sure whether she's awake or dreaming anymore. And stalking amongst them is a raptor-faced specter in a long black cloak -- yes indeed The Harbinger is the horror movie that finally grabbed the familiar terrifying "plague doctor mask" for its own, and lemme tell you what -- what it lacks in subtlety it makes up for with eeriness, cuz that damned mask is still and will forever be creepy if you ask me.

Once Mavis reaches out to her old friend begging for assistance even Monique side-eyes the plague-mask obviousness of her friend's described haunting, but the bond between the two women -- which is achingly detailed by Beans and Davis -- is strong enough, with enough intimacy and history, that Monique comes a'running, much to her family's dismay. And those are the notes where The Harbinger really began to hook me -- playing with the very real and ever-present anxieties we're all been sorting our way through these past two years (the "do I even visit the people I love" conundrums that this unique and awful situation has presented with us) in responsible and realistic ways, all while this beak-nosed beastie prowls around? I'm with ya, movie. One hundred percent.

And those are just the first chapters of what Mitton & Co have in store for us -- beyond the fears of sickness and the perils of loneliness the meat of what this movie's digging into with regards to our moment in time is much sadder and more profound. There an ache at the dark heart of The Harbinger that feels immediate and true, something that taps into this existential sense of loss and trauma that we're all still sorting through. Humanity ain't okay, and The Harbinger knows it, shows it, thrums with the unease of every day, night, day. And in the future, if there is one, maybe we can point over here and say yeah, that one got it right.