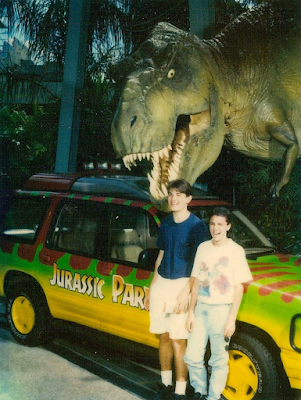 Yes that is a photo of a fifteen-year-old me (and my cousin) in the year 1993 at Universal Studios Orlando being happily terrorized by Jurassic Park's Tyrannosaur Rex -- I hadn't even seen the movie yet at that point but it was all I cared about, and once it came out a few weeks later I went and saw it ten times in the theater that summer (which remained my personal record until Call Me By Your Name came out). Anyway I post it because that hibernating dino-nerd woke up in my belly something hard this morning when I realized I am seeing the new Jurassic movie tonight -- Jurassic World: Dominion hits theaters this weekend and you can watch the trailer here and you can expect my review in a couple of days. Until this morning I had low expectations, but that dino-nerd in my belly is making me super excited anyway! If nothing else... 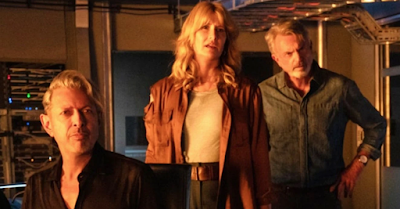 ... it'll be a treat seeing Laura Dern and Sam Neill and Jeff Goldblum all reunited for the first time since the original movie. I'm really hoping that Dern side-eyes Chris Pratt right off a cliff, I am! 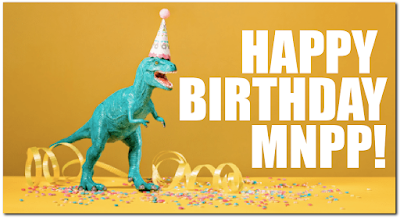 But wait! Jurassic Park nonsense is not the only reason I'm posting right now -- speaking of looking backwards in the rearview mirror that says "Objects in mirror are closer than they appear" or whatever, I realized over the weekend that I forgot to mark MNPP's birthday last week! I started blogging this site on June 2nd 2005, meaning we just turned seventeen! We're like that Janis Ian song now! Weird to think I have been blogging here longer than I had been alive in that top photo? Ergh best not fall down that wormhole. Anyway thanks to everybody for reading! And as I do every blog birthday I'll now put on my lil' beggar's cap and say -- hey, if you enjoy what I do here, why not toss us a penny or two?
You can donate right here. Or in
the right-hand column there is a link too.
Thanks y'all!

I have seen Bela Tarr's The Turin Horse 12 times. What do I win?

Congrats on the anniversary! It's always a bright spot in my day when I pop in and read the treasures here.

When the trailer for Jurassic Park came out it connected deeply with me. I found myself dreaming about it. The idea that I was going to see super realistic renderings of dinosaurs for the first time after fantasizing about them all my childhood, was quite a strange, exciting feeling. I'm not a dinosaur fanatic, just someone who found them fascinating enough to think about their existence and what they represent to the theory of evolution. The film connected that line of fascination and fulfilled something I hadn't realized was in me. What an amazing moment in my movie-going past. After seeing the film, my brain was fried with so much stimulus, but in a good way. It was everything I had hoped for and more.

I love this blog!! Thanks for all the amazing, fun, insightful content!!!