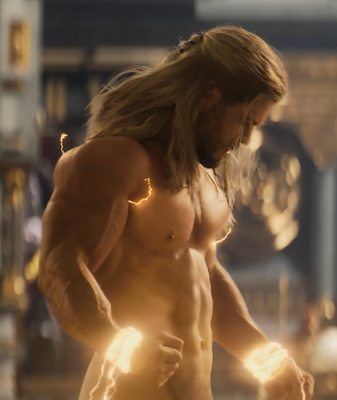 "We all knew we wanted to do it from very early on. That was in the first draft of the script actually and Chris was on board as well. You know, I think you have a body like Chris, like, you know, even he understands. It would be just, it would be a waste to not show it off. It would be a crime against humanity. So, you know, it's, you have to provide for the masses."

-- That's Thor: Love and Thunder director and professional gay-baiter Taika Waititi talking to ComicBook.com about the scene glimpsed in the film's most recent trailer where Chris Hemsworth's outfit gets finger-snapped off by the god Zeus (Russell Crowe) -- if you missed the gifs I made click on yonder. The trailer blurs our Thor's thunder buns but I have no doubt we'll see them in the finished product -- the movie got rated PG-13 last week for "partial nudity" which seems to seal the deal that this won't remain a trailer-only tease. Will this be the most nudity in a Marvel movie then? I recall some implied nudity with Mark Ruffalo in one of the Avengers movies? Am I forgetting anything? 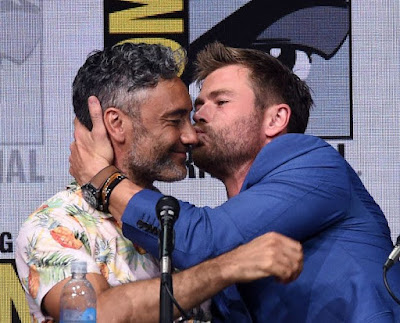 You get Edward Norton's butt in INCREDIBLE HULK but that was only their second film before all their corporate mandates were in place.

It's just so pathetic. Haha.

Finally, a male director gets it! Christopher Nolan, are you listening?

Gotta provide them asses to the masses. Can’t wait! 😋

Ruffalo is PG naked when he wakes up in a barn, or a warehouse? He definitely shows some extra skin, and we all know he has no problem with taking his clothes off, Thank Thanos! See "I Know This Much is True" for the Full Glory!!!

Nolan gave us some skin in “Memento” from Guy Pearce.