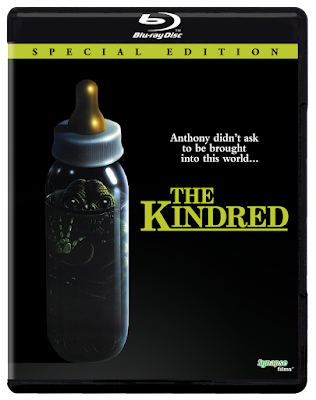 Very happy news hit on Friday when I was off that nearly got me to pop on here for a post, so happy had it made me -- on October 25th the fine folks at Synapse Films will be putting out a standard version of their Special Edition blu-ray of their 4K restoration of Stephen Carpenter and Jeffrey Obrow's 1987 squicky horror flick The Kindred! They had released a limited edition steel-book of this movie awhile back which retailed at about 50 bucks, a price I hadn't quite come to terms with since I had never seen the movie before. But then my curiosity got the better of me so I watched the really terrible copy of the film that's on YouTube...

... and I loved loved loved it. Even in that terrible quality this movie's a blast -- a Lovecraftian monster movie about genetic scientists experiments gone terribly wrong, it's full of those 1980s practical effects we dream of -- it's just extremely entertaining and a perfect time-capsule for any fans of 1980s Horror. Anyway I came super close to splurging on the steel-book after that, but I'm gonna feel far less guilty to pick up this cheaper still incredible-seeming blu-ray in October now. Pre-order yours right here, and then down after the jump I'll share the full press release with all of the extra features on this version...

In the 25 year history of Synapse Films perhaps no film in the company's storied history had as long a road to shelves as The Kindred, which took many years and a lot of hard work to complete.  Now, The Kindred is finally unleashed on Blu-ray this October 25th with a stellar new 4K restoration of the complete, unrated version of the film, accompanied by plenty of extras, making it perfect monstrous viewing for Halloween 2022!

Academy Award-winning screen legends Rod Steiger (In the Heat of the Night; Duck, You Sucker) and Kim Hunter (A Streetcar Named Desire; Planet of the Apes) star in The Kindred, a chilling tale of a genetic experiment gone wrong… very wrong!

Kim Hunter is Dr. Amanda Hollins, a molecular scientist who calls on her son John (David Allen Brooks) to eliminate  all evidence of her genetic experiments… most specifically her “Anthony Journals.” Dr. Philip Lloyd (Steiger), an acquaintance of Hollins who is  familiar with her experiments, wants to continue her studies no matter the cost! John heads to his isolated childhood home with a group of friends to uncover his mother’s research and destroy it all. There’s something else in the house, however… something watching and waiting… a tentacled creature born from the desire to alter human evolution. It’s evil. It’s mad. It’s ready to kill!

- New 4K restoration of the unrated version of the film.

- Inhuman Experiments – The Making of “The Kindred”, an all-new documentary produced by Red Shirt Pictures (52 mins.), nominated for the 2022 Rondo Award for “Best DVD/Blu-ray Extra”.

This release of The Kindred is REGION FREE for world-wide playback.

SUBTITLES: English for the Deaf and Hard of Hearing