Back to Back, Sacroiliac, Spineless Movement 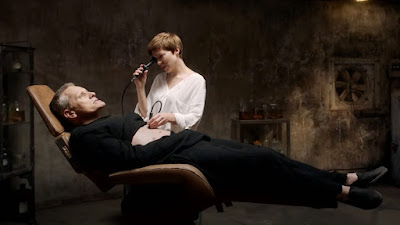 I think what hits you first is the silence. When you think about David Cronenberg films I think you first think of big things -- big slimy things bursting out of places where big slimy things should never have burst out of. Or into. You think of BrundleFlys and torso-slits and Jeremy Irons filled gang-bangs. Of that way Stephen McHattie's face just hangs off of him when Viggo Mortensen shot him through it in A History of Violence.

What you don't necessarily remember, or I never do until I'm sitting down to watch another one of Cronenberg's movies, is the diabolical silence. And the slowness. The purposefully glacial pace. The way it's all slightly affected, stilted, forcing you to lean in and do a lot of work yourself to meet the movie on its bizarre, singular wavelength.

It's been a full eight years since I needed to reacquaint myself with that ever determined tone of Dave's -- cold and hot, goofy and dead serious all at once. A whirlwind of contrasts so bleak and magnificently their own that it is its own state of mind -- he has, after all, become his own descriptor. And since you do get used to his movies with repeat viewings -- their maddening rhythms become familiar, or as familiar as a twitching gay sex bug with Julian Sands face stretched over it can ever become anyway.

And so it's only really when a new one comes along that you're reminded. Oh right. That's what he means. He doesn't not ask a lot of us. His movies are difficult, stubborn, off-putting. Ambitiously alienating. He wants to reach himself into your belly and tug at what unnerves you. To tug and to caress, to be intimate with your under-parts. David Cronenberg wants to make you feel funny in all kinds of funny ways, babe, and bless the heavens and stars for that. 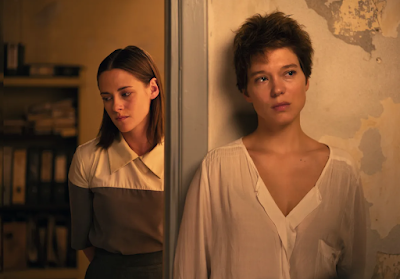 This experience can sometimes make one more dismissive of a Cronenbergian dip the first go through, but as I have learned from the past -- hello there, Cosmopolis -- that way tomfoolery lay. Cuz the thing is these movies shove at you, slap you around, and then lick your bruises. They lay eggs in your brains and hatch only after. A David Cronenberg picture takes time, patience, space and a cool wetness for their moss to spread.

Which is all to say I kind of had no idea what I could write about his latest deliberate anomaly called Crimes of the Future after seeing it the one time a few weeks ago, and I'm clearly still at a loss for particulars six paragraphs in. The film stars our muse Viggo as the performance artist Saul Tenser (yet another perfect Cronenberg movie name) who is able to grow aberrant organs, only to then have then them tattooed and removed by his sexual and artistic life-partner Caprice (Léa Seydoux, fitting into the smirking whisper aesthetic just right). But no, this ability only makes him mildly special -- the world in which these characters live is not our own, but some future weirdness where everybody's half-tumor with legs, so much so that there are governmental agencies entirely devoted to such things.

Enter Kristen Stewart, earning her standard-round-these-parts kudos as Timlin, a buttoned-up agent of one such place -- and if you've ever seen a Cronenberg movie then you can already picture what the offices look like, barren places with old-fashioned filing cabinets and spider-nests in the overhangs. She and her partner Wippet (yes Wippet), played by outstanding Cronenberg regular Don McKellar, sneak around the fringes of Saul's world sniffing at the weirdness, taking little licks before admitting that they're of course way more fucked up and perverted than anybody.

It's all very slow and grotesque and old-school Cronenberg in the best sense, and it will probably, should probably, stop you dead in your tracks. Scratch scars. It will demand effort, and a double to triple dipping, is my point -- I feel as if writing about a David Cronenberg movie with just one watch is for fools. I can't do it. I mean I just did it, but did I? Really? I guess what I mean to say is I don't want to do it. I don't want to write about it yet -- I just want to see and hear and live in the movie again. So y'all go see Crimes of the Future, see it several damn times, and make up your own minds. And I'll be here doing the same. 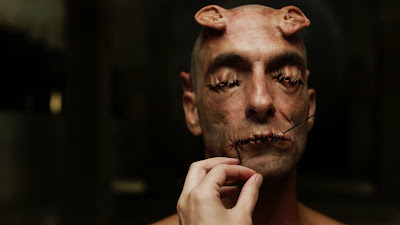