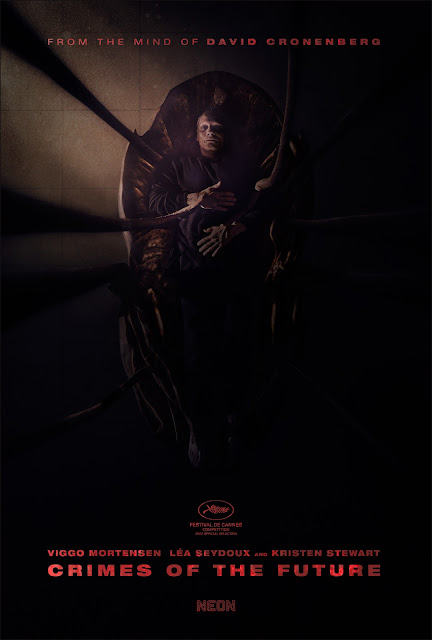 As promise-threatened yesterday with that super-ooky other poster for the film that I shared the first trailer for David Cronenber's Crimes of the Future has arrived and this shit is hardcore -- it's like the past twenty years that DC spent not making Body Horror Movies all knotted up and twisted inside his intestines and this beautiful freak-fest just up and burst out one day through his belly-button, fully formed and thick with mess. Oh my god I am so excited my knees are buckling.

Starring David's favorite pervert Viggo Mortensen alongside the ever-game Kristen Stewart and Léa Seydoux and hey-ohhh who's that hot bearded boy that we see for a split second there...

... oh right, Scott fuckin' Speedman is in this too, huzzah! Crimes of the Future will play Cannes and then it will hit U.S. theaters on June 3rd -- dude that is less than a month from now! As much as I have enjoyed many of the movies that Cronenberg's made over the past two decades I couldn't be happier that he went back to his familiar stomping grounds and decided to throw it all at us at once in one big deviant nightmare -- when your name has become an adjective it means something to people, I am glad he could embrace it again and show us whatcha still got, baby! My man.