In the Marvels of Madness 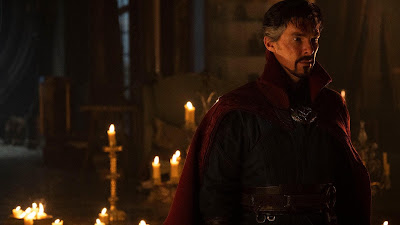 Raimi, Raimier, Raimiest -- those were the words that kept kicking me in the face last night during Doctor Strange in the Multiverse of Madness, the latest Marvel Cinematic Universe offering featuring Avengers and Scarlet Witches, Wizard Supremes and several very surprising guest stars, faces old and new, that will surely set comic-book fans toes to tingling. Speaking as an old-school Raimi fan from ye horror days of the Evil Dead films you can sense the maestro's presence early on in the details, but you know that scene in Evil Dead II where an itty bitty drip-drop of liquid turns into a firehose of viscera blasted into Bruce Campbell's face? That's the way the Raimi comes at us with Multiverse -- drip, drop, kablammo, baby. By the last act we might as well be watching Army of Darkness II for how deep his deliciously dastardly vibe, big on goop and goof, has infected the typical flat-ironed and steel-bellied tone of the MCU.

I've got no big desire to dip my own toes into plot specifics but the basic gist here is that fresh hero-to-be America Chavez (a winning Xochitl Gomez) has powers flaring up beyond her control and a whole raft of big baddies (many of them many-tentacled and goopy to the max -- all the better for Raimi to slam in and squish them with windshield-like glee) are chasing her through multiple universes to suck said powers straight outta her. And in every universe which America stumbles she stumbles straight upon the good Doctor -- Strange that is -- and he helps her... or he helps her by hurting her... it all depends on the mood and emotional gradations of that slice of the multiverse's Stephen.

So Stephen Strange helps her or he doesn't, and the Stephen Strange we're familiar with, in our own chapter of the Marvel Universe,  decides to help her by going to his friends to get some help. Enter the sly and delightful Benedict Wong as Wong the now-reigning Sorcerer Supreme, and also enter Elizabeth Olson as Wanda Maximoff, last seen nursing her emotional devastations post-WandaVision with a very big very bright red book. If you're a comics fan you know that book is called the "Darkhold" and if you're not a comics fan the movie will explain it to you, don't worry. But I think you can guess by its name that that book, in the grand tradition of "Books in Sam Raimi Movies", is problematic! Necronomicon-ho! 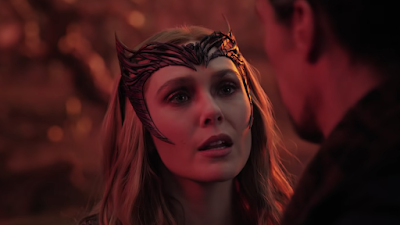 Anyway, as many iterations as Benedict Cumberbatch gets to play with as Doctors Strange in this movie, the Multiverse of Madness belongs for me to Olson. And as she's proven time and again, Elizabeth Olson is doing the best acting in the entirety of the MCU. This movie doesn't change that -- it only triple underlines that. While I remain resentful that an actress this talented and multifaceted seems to have been swallowed up entirely by the superhero complex, it's hard to keep that anger at its necessary boil when they keep giving her actual meaty material to work with like they did with WandaVision and like they do in this movie here. She's exceptional, delivering a three-hundred-and-sixty degree range of emotion for poor embattled Wanda, the big-eyed girl whose torments know no bounds. There's something to be said about the cruelty and pain that superhero stories seem intent on inflicting upon women in particular, something I'm not going to fall down the rabbit hole with right now, but Olson makes the experience riveting nevertheless.

And this movie isn't just cruelty and pain obviously, but as with anything you can label "Raimiest" the director adores butting said pain up against goof and camp and the broadest sincerity, threading the world's trickiest tone like a multiverse-sized camel being jammed through the eye of a needle, a needle in a pile of needles ten pyramids tall (dare I say a "time-stack?) His Wizard of Oz movie showed what happened when the balance was off -- yikes -- but he's got all his plates spinning here, and Multiverse of Madness will send you reeling from emotional high to high like we're leap-frogging a mountain range. As much fun as the last Spider-Man was (and I dug that sucker plenty) this one's much more my jam, and this is the one I'll be re-watching, high off its giddy obscene supply. This is not Sam Raimi chained to anything -- this is the MCU chained to Sam Raimi, and swooping straight through the fires of hell and up through the stars and back, demons screeching on our tails the entire time. What a great goddamned time at the movies! 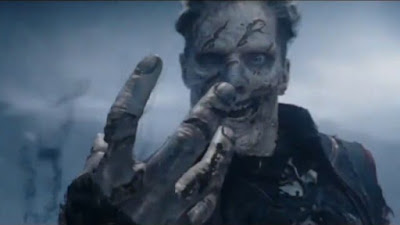