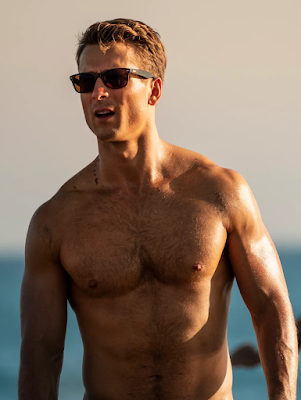 I apparently missed this photo being released as an official still from Top Gun Maverick (the full version is down below), just like I missed them releasing a similarly gratuitous Glen Powell character poster for the film from this same scene until a couple of days ago -- I done had my head up my ass on all of this? I clearly would have given the film more love in my review-ish thing if I'd known they'd been working so hard to placate my thirst-ful lusts -- oh well! Anyway I know some of you watched TGM over the weekend because it made a bajillion dollars, so feel free to toss some of your own thoughts in my direction, kind of like how Glen Powell's glistening torso threw that football in Jat Ellis' glistening direction during the movie. Actually scratch that "kind of" -- make it just like that, exactly like that, with some extra emphasis on "glisten" and "torso" please. 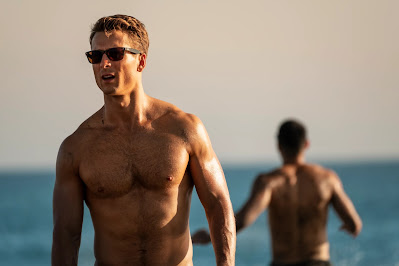 Unnnh, THAT is a man.