It's a Good Feel-Bad Weekend at the Movies! 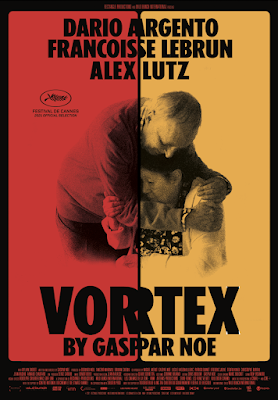 There are two movies out in theaters today that I want to real quick recommend you seek out if possible, while also side-stepping writing proper reviews of them because in both instances I saw these movies months upon months ago, didn't write about them at the time, and then forgot to revisit them here in time for their theatrical releases. I suck, et cetera. Anyway I'm doing my least due diligence right now, and that's something! The first movie is Gaspar Noé's devastating and harsh small-scale flick Vortex, which stars the director Dario Argento and the actress ﻿Françoise Lebrun as an old married couple dealing with dementia while cooped up in a jam-packed-with-memories (and books!) Parisian apartment. And honestly this apartment, as claustrophobic as it might seem to most, looks like a dream to me. I aspire to their hoarder lifestyle. Anyway both actors are terrific and the film is deeply distressing, but in low-key and naturalistic ways that Noé's not really known for -- yes he uses a two-camera split-screen technique for the entire movie, but it's not a film that actively assaults you; it more just slowly leads you down a path to no return and it's so beautiful and so awful all at once. So yeah a real fun time! Highly recommended! Here's the trailer:

The second film I not reviewing but I am recommending is the Finnish nightmare fuel Hatching, a miniature fable equipped with talons that I saw during Sundance and very nearly wrote about but eventually didn't get to, under the massive crush of other stuff. Film festivals are tough in this way! But Hatching has been sneaking around the back of my brain ever since -- for one it's got some fantastic monster practical-effects that made my Inner 80s Child very very very happy. For another it tells its simple story wonderfully simple, with great economy, so it sticks in your brain in ways movies that try too hard don't. It feels like something your incredibly mean-spirited grandmother might have told you before bed one night when you were small and too impressionable. See it when you can see it!