Yes that Fantastic Man magazine cover is of the actor and ear-holder Josh O'Connor serving up his best "Early Man" Realness, and double-yes it also says it was photographed by one Luca Guadagnino! (Josh and Luca are making that tennis movie together right now, you might recall.) In fact here let me re-copy all of the type in case some of you don't have Instagram and can't see of what I speak, it's all worth sharing:

"After months in production, its big premiere is about to arrive! The 35th edition of Fantastic Man is a blockbuster issue directed by the Italian filmmaker, LUCA GUADAGNINO. A feature-length volume devoted to LUCA’s obsessions – movies ripe for a remake, bodies to like, people to love, featuring a collection of conversations with amazing actors, artists, musicians, as well as individuals the director calls family and friends. On the front cover, werewolf JOSH O’CONNOR is seen in his full hairy transformation, photographed in Rome at the end of February 2022." 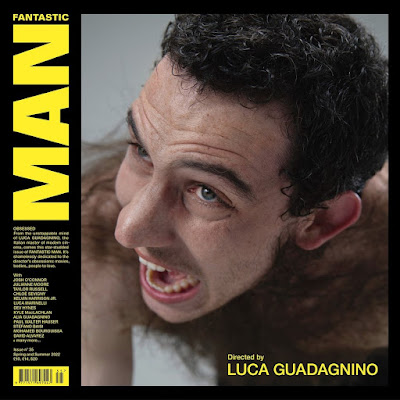