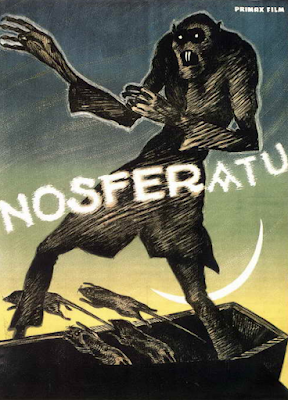 While the motion picture of course existed for thirty-plus years before the year 1922 came around, I think there's a solid argument to be made that the vampire Nosferatu (via F.W. Murnau's film of the same title) is the oldest movie icon that would be recognizable to the broadest audience, right? The Cabinet of Dr. Caligari in 1920 maaaaybe comes close but I think that one's strictly cinephile nerds -- if you said "Nosferatu" to most anybody they'd have an image in their head and the image would be the actor Max Schreck. Can you think of any earlier ones? Anyway if that is indeed the case then I think it's reasonable to say that The Movies, our modern iconography of them anyway, began 100 years ago this very day with the official theatrical release of Murnau's silent classic. And this seems like a big moment to mark! And so mark it I did with a little essay on all things Orlok over at Pajiba --  click on over for that. And even if I'm over-stepping by giving Nosferatu too much credit for All Things Movies I don't think you can actually underestimate the importance of the character and film to Horror, both Horror Film and to our general ideas of The Vampire, ever since. Pretty darn iconic, ya big toothed bat man!

I think there was a very early version of Alice in Wonderland. Plenty of iconic characters in that. But maybe recognizable from that version.