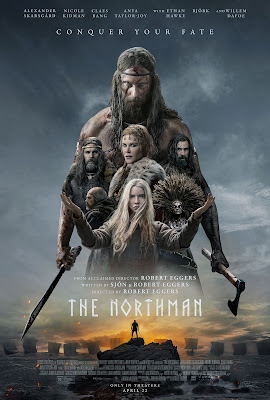 Last week I shared with you (and bitched about) a new poster for Robert Eggers' The Northman that was full o' Alexander abs yet somehow still managed to stink? Well today they've sent over a new version of the same poster only with no abs... but it's better? Moving all of the characters who were behind Alexander Skarsgard into the front should piss me off since they're all now ab-blockers, but it simplifies the form of the thing and looks much better. I also like the thought that Skarsgard is wearing an apron made out of Bjork and Nicole Kidman and Anya Taylor-Joy, or maybe they are coming out of his stomach like Quato from Total Recall or that one gross scene in one of the Nightmare on Elm Street movies. Also, adding to the amazingness, the long luxurious hairs of Ethan Hawke and Claes Bang are now Alexander's long luxurious armpit hairs, lol. I love it! 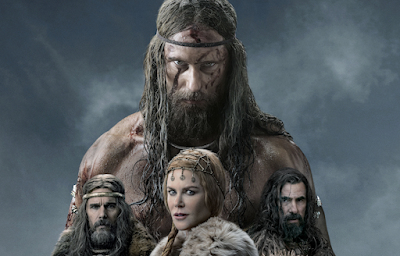 I was trying to find bjork in there and realized it is that brooch looking thing.

Hee! I'm wondering if the cheap artwork is meant to lure the action bro's into a wonderfully weird arthouse horror fantasy movie or if us movie geeks are being lured into some schlocky action bro-fest by Alexanders abs, Björk and Nicole.