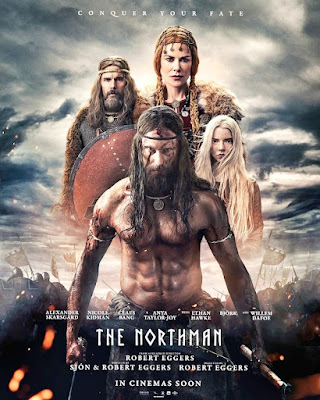 Y'all do know that I am excited about The Northman right? As was inevitable after whatever Robert Eggers did post-The-Lighthouse, aka my favorite movie of 2019, I've only been posting about it non-stop since the second it was announced, and then once the photos of Alexander Skarsgard ripped to the hills started appearing... I mean, forget about it. The movie's out in less than a month now, I have gotten press emails about screening announcements being forthcoming, and I remain giddy as a gadfly. (I don't know what that means but it rolls off the tongue good so let's make it a thing.) So all of that fervor underlined and circled, can I make one complaint here with the appearance of the new poster?
The marketing for this movie has been [whispering] a lil' shitty right? Cheap, is the word I am looking for -- cheap. And generic. And cheap. A Robert Eggers is probably not gonna look like a lackluster episode of Vikings, and yet all of the marketing is making me think it might. So I will not say I am worried. But I wish they'd cut a trailer that was all about the no-doubt kick-ass visuals we'll be getting (some of which were glanced in the first trailer) and less about the pedestrian stuff. Give me a reason to see this on a gigantic screen, people! I know there is a naked fight on the side of a volcano -- why is there only a one second shot of that in the trailer? They need to wow us a little better, is all I am saying. Anyway I'll be there at the first screening I can get to, y'all have no doubt about that -- until then below is a variation on the new poster (I think it does work better as a quad, but it's still awfully "video box art" like) and if you hit the jump there's a new image from the movie too... 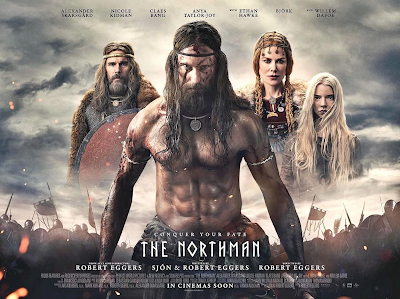 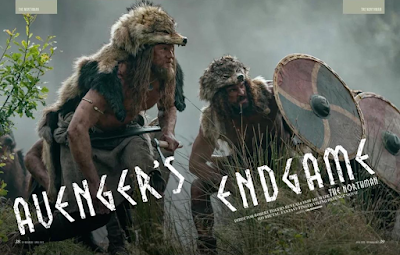 Oof, how can a poster that include his abs look so… terrible?