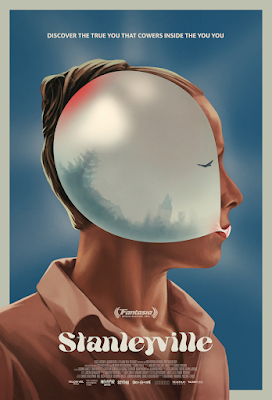 Heads-up on a terrifically weird and weirdly terrific upcoming movie called Stanleyville, which will be playing for a week at the Metrograph theater here in NYC in exactly one month on April 22nd and then moving on to other locations thereafter -- I saw this movie during the Nightstream horror film festival last October and wrote up my briefs thoughts right here, some of which just so happened...

... to make its way into the just released trailer today! That passage (which hysterically accounts for like one-fifth of my entire review) is probably the least quote-whorey thing ever written, so the fact that it made it into the trailer is spectacular, just spectacular. And fitting for such an off-center movie -- here's the plot description:

"One fine day, prim and proper Maria (Susanne Wuest from Goodnight Mommy) decides to unceremoniously walk away from her boring job, her inept husband, and her obnoxious daughter. Moments after doing so, she’s invited to participate in a bizarre and—as it turns out—potentially very dangerous sweepstakes contest, the rules of which are seemingly unknown to even its organizers, competing with a collection of idiosyncratic characters for the chance to win true enlightenment... and one slightly used habanero-orange compact sport utility vehicle. Dark as night and deadpan hilarious, with every fresh escalation progressing according to a warped logic that makes perfect (non)sense."

This is one of those very odd movies that speak to my very particular odd wavelength so your mileage may vary, but I assume a lot of you come here to MNPP because you share at least some of my particularities and/or interests and/or odd wavelengths, so I hope this movie's for you, too. I really dug it. Here's the trailer:
Who? Jason Adams When? 2:32 PM
Labels: Brooklyn Horror Fest, trailers

Wow! Congrats on that quote, Jason! :)