That's Robert Eggers teasing us in Toal Film magazine (via) this week, which has a cover story on The Northman (that's where several of the photos I've shared recently have come from) -- we already glimpsed the scene in question in the trailer, although it keeps the "naked" part obscured... just how naked? Lord knows I'll be first in line to find out but I really believe them when they say "naked" -- Alexander's never been the slightest bit shy about any of himself (nor should he ever have been!) and this would make for an excellent live-action bookend to the naked fight in Beowulf...

I've also seen a quote going around that I can't confirm, but from a person who said they saw the film and they said something like it's the "most metal thing" they've ever seen; a naked volcano sword-fight would fit right in with that aesthetic obviously! I'm thinking big Heavy Metal vibes. Maybe I should re-watch Heavy Metal? I haven't seen that in a very long time, it was never really my thing -- there's something too heterosexual about it. But naked Alexander changes everything! Anyway in related news you remember that photoshoot that Alex did recently? Actor George Mackay was separately photographed (via) in the same top, so we must poll that shit... 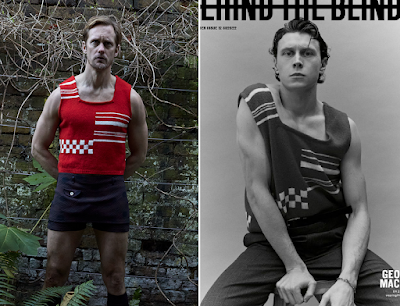 web survey
Who? Jason Adams When? 11:47 AM
Labels: Alexander Skarsgård, Anatomy IN a Scene, George Mackay, gratuitous, Robert Eggers, Who Wore It Best?