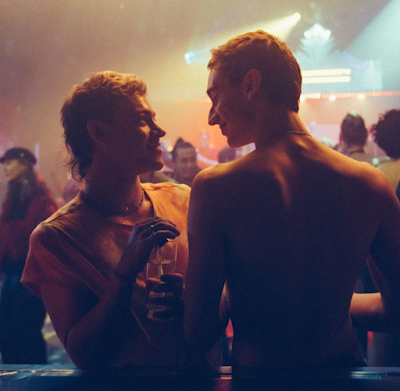 I am shocked to discover that the movie I am about to talk about I have only brought up on Twitter, apparently -- if ever there was a movie that deserved my yammering to makes its way back here to the site for a proper post then this was the movie! The photo above is of the French actor Félix Mairtaud -- best known for the 2018 film Sauvage / Wild (reviewed here) but he was also in BPM and Knife+Heart and Gaspar Noé's Lux Æterna, and these are all movies you ought to see if you have not yet seen them) -- and the Quebecois actor Théodore Pellerin, best known for the Kristen Dunst series On Becoming a God in Central Florida, or his small roles in Never Rarely Sometimes Always and Boy Erased, or maybe from my ongoing Twitter thread about how he is probably dating also-Quebeqois actor François Arnaud.

Here's a photo of Théodore Pellerin & Félix Maritaud sharing a bath on the set of their upcoming movie DRAG via director Sophie Dupuis' Insta https://t.co/COt1s2yVqK (thx to reader Marc-Antoine for heads-up) - film described to me as "a toxic love story between two drag queens" pic.twitter.com/C3J7Rz798f

Separate from the Theo-Fran thread though I tweeted the above back in February and that really should have made its way here to MNPP proper as a news-item, but did not -- Pellerin and Maritaud are co-starring in a movie called Drag from director Sophie Dupui, about two drag queens who fall in love. This movie doesn't even seem to have an IMDb page yet so I don't have much info to share, but the director has been sharing content from the shoot on her Instagram ... 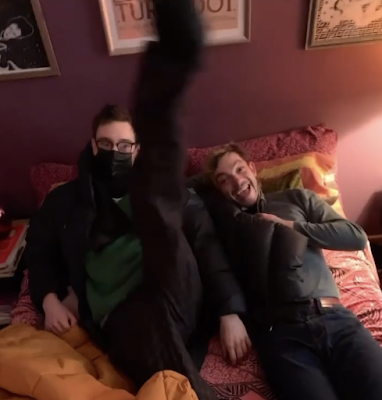 ... (as have the actors) and it appears that they have just finished shooting. (The photo at the very top of this post, which appears to be an official still, was shared by Felix on his Insta yesterday.) I should also add here that reader Marc-Antoine was kind enough to send me all this info back in February when I tweeted that first tweet, and I thank him for it! Obviously I will keep my eyes and ears and whatnot to the ground for more information when it's available -- stay your self tuned!