Going Down With Jonathan Majors 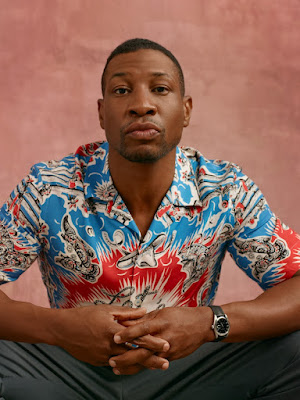 Super happy-making news on the Jonathan Majors front today, as he's lined up a horror movie for himself to star in! (thx Mac) Deadline has the word on The Man in My Basement, an adaptation of a 2004 book by Walter Mosley that's about... a man... being in Jonathan's basement. Oh, the euphemisms I will be able to make! I'm already giddy about it. Anyway here's a little more precise info:

"The novel follows Charles Blakey, an African American man living in Sag Harbor, who is stuck in a rut, out of luck and about to lose his ancestral home when a peculiar white businessman with a European accent offers to rent his basement for the summer. He’ll pay $50,000. This lucrative proposition leads Charles down a terrifying path that takes him to the heart of race, history and the root of all evil. "

I haven't read the book but it sounds terrific and think I might just go order one off of Amazon right this minute. Mosley adapted his book for the screenplay along with Nadia Latif, the first-time feature director who's assigned to the film. Majors himself is producing the project, and this sounds very much in the vein of Majors' turn on Lovecraft Country -- race-based horror is hot hot hot these days, and it doesn't get much hotter than Jonathan...