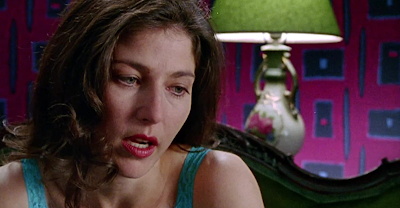 Nicole: I feel like such an asshole.
Nick: You're just saying that because
you have Preparation-H on your face.

Now you talk about a movie begging for a re-watch -- I haven't seen this movie since it came out, for sure. I don't even remember what it's about -- all I remember is how very very 90s it was, even at the time. A movie starring Keener and Steve Buscemi and Dermot Mulroney? Come on!

Anyway a happy birthday to Catherine today! We adore her here. I've really been feeling that a Catherine-Keener-a-thon is coming upon me lately after 1) she played a witch who made people puke kittens in Brand New Cherry Flavor, and 2) she was the only entertaining thing in that godawful Ryan Reynolds movie last week, and that was even before they introduced a terrifying de-aged nightmare version of her which turned that shit straight into uncanny camp.

The de-aged/CG/deepfaked/whatever-the-hell-they-did young version of Catherine Keener in THE ADAM PROJECT is freaking uncanny valley pic.twitter.com/qoC1orywmU

Christ that movie sucked. But Keener, bless her fiery heart, came out smelling fine. Has she ever not? She's always been worth watching; I can't think of anything where she hasn't been. Even if it's a nothing movie she'll waltz in and class the joint up a hint with her delicious sardonic Keener-ness for a sec. Now that I'm talking about her proper-like I feel like doing a list of favorite performances, but maybe I should hold off until 2024 when she turns 65. (How optimistic of me, assuming we'll all still be living people in two years.) For now I'll just ask y'all... 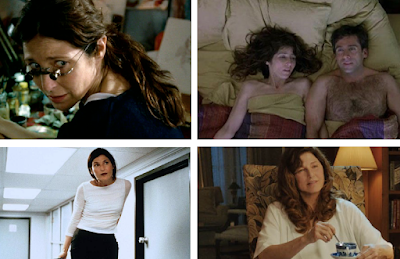 As long as there's white privilege, we will continue to have too many movies put out with bland actors like Ryan Reynolds.

I thought she was terrible in The Adam Project. Reynolds and the rest at least seemed comfortable with the convention of the movie.

I don't think you can get better than Keener in "Being John Malkovich." And I recently saw "Living in Oblivion" again (which is about making a low-budget movie) and she's wonderful in it, as well as James LeGros (who's playing a bratty Brad Pitt) and it's Peter Dinklage's first film!

"Lovely and Amazing" is my favorite Keener performance, with a shout-out to "Hamlet 2."

Being John Malcovich Keener is my fave, with Get Out a close second.

Keener has always deserved better than Hollywood has given her. She steps up to the plate in any role, even "The Adam Project," which I enjoyed for what it was. Not every movie has to be great art and the actors involved elevated the script and direction.

A performance I find fascinating of hers is in "Capote." Basically, the same year she and Sandra Bullock played the same role, and Keener does it with a nuance that Bullock can't quite find. Sandy deserved her Oscar for "The Blind Side," no questions asked. But drama is her Achilles heel. I think "The Lost City" is going to be gangbusters.

But "Capote" has a hex on it because as much as I loved Phillip Seymour Hoffman, this should have been Heath's year. And because of that, Keener's lovely performance has been lost as a result.