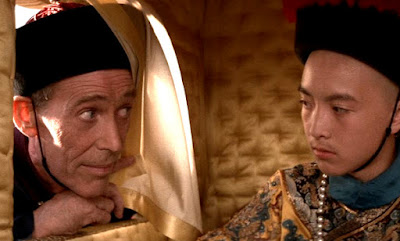 RJ: Words are important.
Pu Yi: Why are words important?
RJ: If you cannot say what you mean, your majesty,
you will never mean what you say and
a gentleman should always mean what he says.

The extraordinarily talented Bernardo Bertolucci was born on this day in the year 1941 (he passed in 2018) -- I just watched The Last Emperor over this past weekend because when I did the year 1987 for last week's edition of my "Siri Says" series I couldn't remember if I had seen it before; turns out I had, I remembered as I watched it, but it had been a very very very long time and I had definitely been too young to appreciate it when I had seen it. 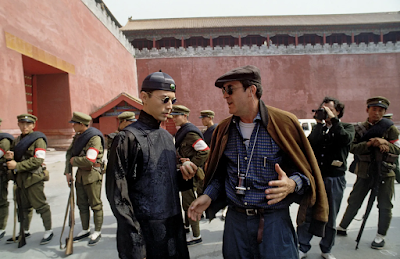 Now in 2022 Current-Me thought it a damn masterpiece (and also that John Lone is a total babe) but then I am pretty solidly in the tank for most everything Bertolucci when it comes down to it. Oh and I did it as a double-feature with Warren Beatty's film Reds, which turned out to be an absolutely spectacular way to spend a Sunday. 1980s Communist Epics, who'd have thunk? But I do mean an entire Sunday, as that's a full three-hundred-and-sixty-three minutes of entertainment there in just two pictures.

Doing this as a double-feature today pic.twitter.com/evsAVxmN4w

That's an excellent double feature. I hope you have a big enough TV. I saw both of these movies at a Cinerama theater that's now been torn down. The screen was rounded and they both were spectacular on that screen, especially The Last Emperor. Reds is a great movie about that period of American history. Jack Nicolson is a marvelous Eugene O'Neill, and the building where his scene with Diane Keaton as Louise Bryant is near the Cafe Reggio near Washington Square Park.

Love The Last Emperor! And John Lone is swoony handsome. And Joan Chen, so gorge...
OK, Bertolucci is great, but have you ever seen Little Buddah? Really bad film, hopefully his lowest point!