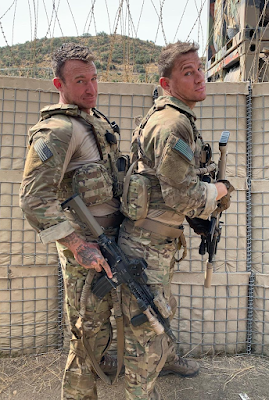 Thanks as ever to Channing Tatum for always being That Guy -- That Guy who'll take photoshoots in a speedo for VMan magazine, That Guy who'll grind his uniformed ass against another army dude on the set of his new movie. You know -- That Guy. (via) His new movie (his directorial debut, no less) is called Dog by the way, it's out this weekend, and it's... about a dog. I saw it last night coincidentally and will have more to say on it later this week. For now though I don't believe I have shared the film's trailer, so this moment's plenty opportune ain't it...
Who? Jason Adams When? 9:56 AM
Labels: channing tatum, gratuitous, trailers

I don't think I can watch that. Channing is way too smug.

HAHAHAHA I get it! He's straight but doing gay stuff. HAHAHAHAHAHA