This morning I wished the Hemsworth brother they call Liam a happy birthday, but then not long after I realized that January 13th is actually chockablock with birthday hunkery, as it also marks the blessed births of Michael Peña, Orlando Bloom, Now Apocalypse fur-monster Beau Mirchoff, and the now-official-gay Julian Morris...

On top of Liam Hemsworth [full stop] today is also the birthday of Michael Peña, Orlando Bloom, Beau Mirchoff, and Julian Morris!!! Good grief somebody give them a group party, then oil me up and throw me into the middle of it pic.twitter.com/3LszcuqJGm

... that's quite the fantasy roster anyway, and it seems not right not to mark the occasion here on the site proper. So let's pit two of them against each other in a hotness fight to the death! For now we'll do it via a poll, but if they want to send me a video of themselves naked wrestling for the win I'll make sure to post that... 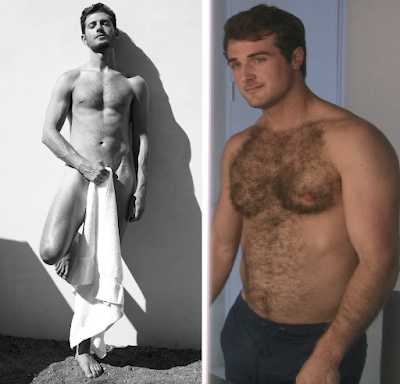 Julian is hot, but Beau is one of the hottest guys in the world. That fur, his sweet green eyes and his beefy body... God... I can't.