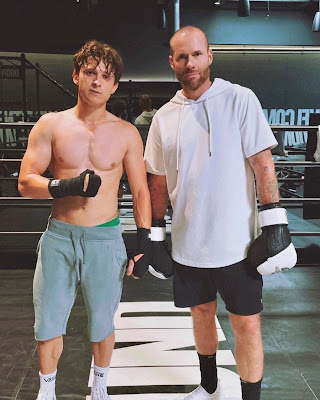 (click to embiggen) I had to do a little digging to find a copy of this photo that included the dude that Tom Holland is posing with because the photo's been making the rounds with him edited out, but I'm glad I found it, and not just because he's sturdy enough that I don't mind visualizing Tom climbing up him like a spider -- because the smug expression on dude's face is making me laugh. That is the expression of a dude who knows he's about to get more likes on an Instagram photo than any random dude has in existence. Dude's name is Oliver Trevena, he calls himself an "entrepreneur and an actor/investor" and it looks like he produces a lot too -- weird thing is he's listed as a producer on an adaptation of the comic-series Hack/Slash (about a Final Girl who starts hunting down and killing all of the Slasher Killers) which I have talked about here on the site before (I was a fan of it when it first came out) and which I was just thinking about for the first time in ages last week for some random reason. Let's put that adaptation back out into the universe!

Who? Jason Adams When? 10:09 AM
Labels: gratuitous, horror, Tom Holland

I want to lick every inch of Tom the Twunk's upper torso. My multi-verse is expanding.

I thought that was Jason Statham before I started reading.