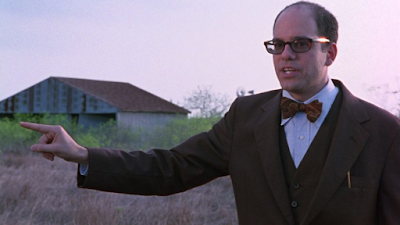 UFO Expert: I've been coming to this circle for about five years, and measuring it. The diameter and the circumference are constantly changing, but the radius stays the same. Which brings me to the number 5. There are five letters in the word Blaine. Now, if you mix up the letters in the word Blaine, mix 'em around, eventually, you'll come up with Nebali. Nebali. The name of a planet in a galaxy way, way, way... way far away. And another thing. Once you go into that circle, the weather never changes. It is always 67 degrees with a 40% chance of rain.

Classified as a 1996 movie most of the time because it played some fests that year Christopher Guest's masterpiece of loving lo-fi thesp foolishness actually came out properly in 1997 -- January 31st 1997 to be exact, making today the film's 25th anniversary! Yes, if you do the math, that makes you old. Me too! Guffman isn't my favorite Guest comedy -- my favorite will always be Best in Show -- but it's my second fave and so full of deep belly laughs it should be classified as a tummy toner. I've done several "Life Lessons" post for the film over the years, see them here, but today I was struck by this WTF random David Cross scene, which I always forget about until it's happening. Good stuff! Do we think Chris Guest will ever reunite the team and make another one of these? (Please say yes.)

Went to see this downtown SF back when it came out. They held a mini audition/talent show before the movie and about everyone raised their hand including me. I was ready to perform a snippet from American Fabulous because I was doing it in school at the time. But I didn't get picked. The queens that got up and did their thing were fun. We watched the movie and laughed through the entire thing. Then when we left they had a table where they were selling the soundtrack. I am still kicking myself that I didn't but one.

I've somehow never picked up on that "there are five letters in the word Blaine" joke until seeing it written down. Love this movie a lot!