We All Scream For 5-Cream 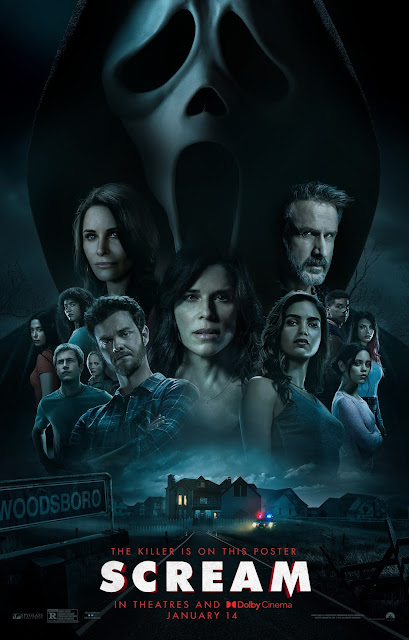 The new poster for the fifth Scream movie, which is simply titled Scream -- still furious they didn't go with 5cream but we will do our part, continually pronouncing the film that way -- has arrived, with the threat that "The Killer Is On This Poster" as a tagline. And yeah no Shit 5herlock:

I found the killer! Do I get a cookie? I know, me and everyone else who had that thought and tweeted it out last night when this poster first dropped are spoil-sports -- they clearly mean one of the human faces down below. And they've been playing with us that Sydney, Dewey, or Gale could turn out to be the killer(s) since the first sequel but I honestly would be really shocked if they went there, ever... which might be the reason they do that, but I'd hate it, and it would feel like a slap at Wes Craven kind of? Is that a weird feeling to have? Well I have it. I don't know if he ever went on the record that he wouldn't have liked that but the four films he made, where that never happened, seem like "on the record" enough. He kept them alive and he kept them decent, and that always felt purposeful. So I am hoping that the makers of this one respect that, and the killer is one (or two or ten) of those teenaged nobodies skirting the sides. Anyway 5cream is out on January 14th! That's only a month away, you guys!!! Look what I got in the mail this weekend:

Got a surprise in the mail today! #Scream pic.twitter.com/FrVKamXoUg

Doesn't a January release typically mean the movie is a stinker?

It was a tired franchise by no 3 and the trailer gives me few hopes and Scream never scared me for 1 second,it's a fun movie for Horror buffs but never very scary,Drew Barrymore had the right idea and got out quick,they never topped that opening in any sequel.

Gee, is Courtney Cox STILL playing a bitch? She always plays a bitch!...I wonder why?