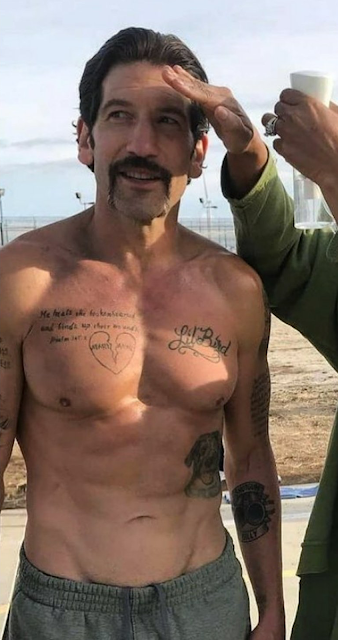 My assumption is that this photo of Jon Bernthal was taken on the set of his forthcoming update of American Gigolo because -- and this took some real hardcore detective work on my part -- he looks exactly like he looked in that footage from the set of that show that I posted last February. From the handlebar 'stache down to those gray sweats, and every tat in between. (For those of you wondering about this look matching with your image of Richard Gere in the 1980 film, Bernthal is supposed to be playing the same character once he's getting out of prison for the death at the end of the film -- and uhh spoiler alert for a 40-year-old movie.) Anyway I don't actually know where this image came from (I got it off a random Tumblr) and I still don't have any update on when this show will air but I felt the need to share the photo for obvious reasons -- if you know where it came from original do tell! I am especially curious because it looks to me like it could be a frame taken from an Insta-story and who wouldn't want to see this moment in motion?
Good morning!
Who? Jason Adams When? 10:03 AM

That man is SO damn, damn, damn sexy in a feral sort of way!!!