The Power of This Dog 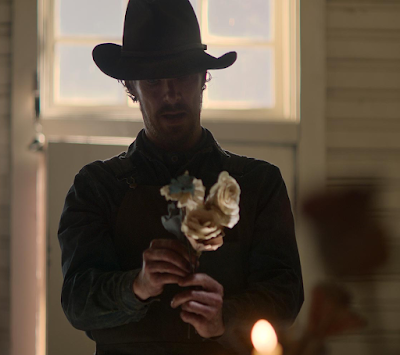 I promise you that I will write about Jane Campion's The Power of the Dog -- which is out in theaters today! -- at some point, as it is, of this moment, my number one film of 2021. I've seen it twice now, once at TIFF and once at NYFF, and I knew immediately it was a fave -- in the weeks since it's only grown in obsession and masterpiece-ish stature. Y'all know I stay away from the "m" word when movies are this new -- I think a vital ingredient in "masterpiece" is time -- but sometimes movies come along that feel so grand and stunning right outta the gate that you know, deep inside of your everything, your regard's only going to grow bigger and bigger with time, and this is one of those suckers for certain.

Anyway until I manage to wrangle with the film properly and get my own thoughts down I just wanted to make sure to post that you should all figure out the soonest moment you can see the movie, and so here I am doing that. Find your nearest theater here! If it's not playing in a theater near you it is hitting Netflix on december 1st, and I've seen the movie both ways -- on the big screen for NYFF and the little screen for TIFF -- and it works both ways, but I'm really really really glad I did manage to see it on a big screen because those vistas that Campion captures... man alive. So try for a big screen if at all safe and possible, my loves. And in summation...

(Then again if I had ten minutes to talk movies with Jane Campion I would probably just cry the entire time, so)

I love things that grow bigger with time. Can't wait to see this one.

POTD reminded me of watching an old western with my grandpa when I was young boy. Best film of 2021 so far with me. Exquisite film all around with phenomenal acting led by a powerfully convincing Cumberbatch. Kodi Smit-McPhee and Kirsten Dunst really stand out amongst the ensemble. They ring true as mother and son and they love each other so much. These two are taking the Oscar’s in supporting I’m seeing Oscar gold for this entire film!

make sure you pay respects in your review to bronco henry. 😂