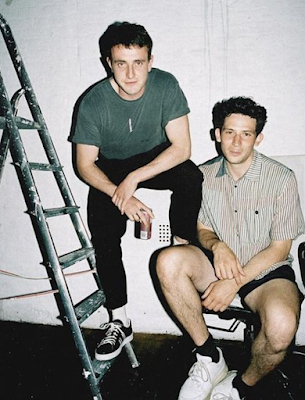 Don't get too excited, I think that photo is faked. But it's a good reminder of the recent in-itself exciting news that Josh O'Connor and Paul Mescal are going to make a gay romance movie for us, and I'll take any reminder of that, any day, any hour, any second! (And anyway -- Josh in those shorts! Phew!) And having that to post is a good gratuitous segue to lead me into my real reason for being here -- the trailer for Josh's new movie Mothering Sunday was released today, and I have that below.

I saw Mothering Sunday at TIFF and reviewed it right here -- it stars Odessa Young (so good in Shirley last year) as a maid who's having a torrid affair with the fancy-man son of a neighbor's house (O'Connor) not long after WWI; the movie also stars Olivia Colman (who has one scene where she grabs your heart and smashes it onto the floor in a billion different pieces) and Colin Firth. It's worth seeing, and that's even before we get into how very very very naked Josh is for a bunch of it. Weirdly the trailer doesn't use that as a selling point -- they really should let me cut these trailers; I'd get butts in seats! Butts for butts!
Mothering Sunday is playing one week in L.A. on November 17th
and then gets a proper drop come February 25th of next year.
Who? Jason Adams When? 3:54 PM
Labels: gratuitous, Josh O'Connor, Olivia Colman, Paul Mescal, trailers