Did everybody have a nice Halloween? Sad to see my favorite holiday in the rear-view but I actually had a really lovely holiday week this year. Stretching from my 4th Annual Vincent Price Dinner last Tuesday (see photos here if you missed it) through getting to see one of my new favorite old movies on the big screen on Saturday night -- 1973's Messiah of Evil, thanks to the ongoing "Folk Horror" series at Anthology, which I posted about previously here -- and then up to the actual day itself, yesterday, where I had myself a little binge. I watched seven horror films I'd never seen before; there's even a Twitter thread...

Gonna do a HALLOWEEN WATCH THREAD -- got off to a late start this morning but #NowWatching RATTLERS (1976) pic.twitter.com/Y0Uo8jbloZ

But who wants it to end there? Not me. Halloween all year long! Or at least through this afternoon, anyway? We'll go little steps. I thought instead of just letting the movies I watched yesterday evaporate into the ether like so much I watch these days I'd rank them! Give you a little idea, out of the seven what's worth your time, if any are new to you too. Well I say "seven" but I actually can't speak of the seventh film yet -- that one isn't out until December. Treated myself to a brand new screener to end the evil night with. That movie is called The Scary of Sixty-First and it will hit the Quad Cinema here in NYC on December 17th before hitting some more theaters as well as streaming platforms the following week. Here's its trailer:
I will have more to say on that one closer to its release. But that leaves six movies --Six! Wah ah ah! -- that I watched otherwise yesterday, all of them old things that I can totally share my crusty thoughts on. So let's! Ranked from worst to best...
My Halloween 2021 Watches 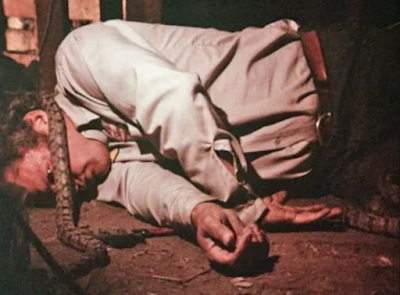 6. Rattlers (1976) -- Listen, this was absolutely watchable crap. But crap nonetheless. It was the perfect first film for my fest though -- nothing better than watching some garbage as you wake up on Halloween morning. And this was one hundred percent worth it for the scene where a camping couple's tent suddenly fills with the titular snakes when even more suddenly out of nowhere a soldier with a machine gun bursts into said same tent and starts firing the gun everywhere. Absolute nonsense.

5. 13 Ghosts (1960) -- I was tempted to do a double-feature of this with its 2001 remake because I've never actually seen that one either, but more than that impulse I wanted to veer wildly from genre to genre and that instinct won out. I'll save the 2001 film for next year (I am definitely doing this again). Anyway this is one of the William Castle movies I've somehow never seen and it's totally fun -- I enjoyed every movie I chose -- but it probably lost something not seeing it with an audience, and not having the red-blue Ghost-finder glasses that Castle created as a go-along gimmick. 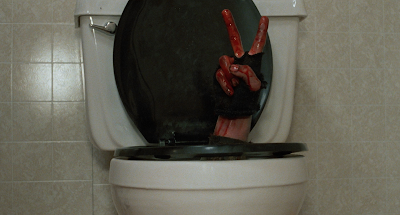 4. Pledge Night (1990) -- A jaw-droppingly sleazy frat-boy possession slasher that I can't believe I hadn't seen before - so so gay, this thing. There's a long hazing sequence involving frat boys in jockstraps carrying cherries from one side of the room to the other clenched between their butt-cheeks, for god's sake -- talk about appealing to my interests! It's also outrageously nasty in its violence -- I don't know where this movie came from or where it's been all these years but I can sense it becoming a standard in my house.

3. The Red Queen Kills Seven Times (1972) -- I needed a giallo at this point in the night and this beauty's about as giallo as they come. There's a half-dozen indistinguishable blonde women, a sleazy dude in a robe that's way way way too short, an extended fashion shoot sequence, a red-caped man-woman-killer with a gigantic golden dagger (James Wan had to have been referencing this with his murder weapon in Malignant, I think). Everything to scratch your giallo itch! There's also a flooded castle at the end, and god I love a flooded castle. 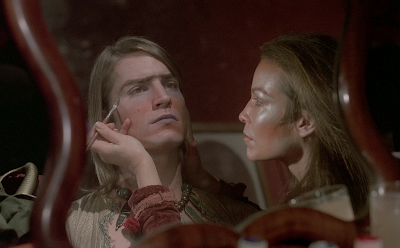 2. Black Moon (1975) -- I reviewed this movie called Mayday earlier this year at Tribeca that stars Grace Van Patton, Mia Goth, Juliette Lewis, and Theodore Pellerin (see the trailer here) that's about this girl (Van Patten) who, shades of Alice, falls into  a strange world where Men and Women are literally at war with one another, and I wish I'd seen Louis Malle's Black Moon beforehand because talk about some similar riffs. Black Moon's a better film -- it is made by Louis Malle -- but the similarities are striking. Anyway I love a weird dreamy Alice in Wonderland riff always, literally always, and Malle's movie has Joe Dallesandro wearing golden jewelry while fighting an eagle with a sword, so winner. 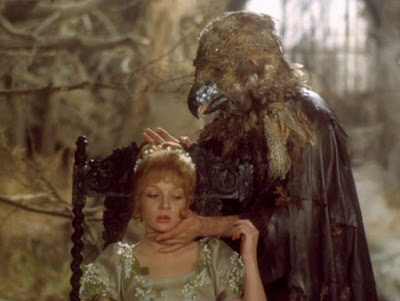 Okay we should probably take a moment to recognize what the Beast looks like in human form in this movie, cuz goddamn pic.twitter.com/oeroc2HSUv

Have you seen any of these movies?
And what did you watch this weekend?
Who? Jason Adams When? 5:55 PM
Labels: 5 Off My Head, horror, Joe Dallesandro, lists, Vincent Price

i saw your vice is a locked room and only i have the key, which maybe is in the running for best fiction titles ever.

There are SO MANY amazing giallo titles. That said I can never keep straight which giallo is which -- I know I've seen YVIALRAIHTK but I have no idea what it's about anymore? They all mix up into one big stew of sameness after you've seen enough of them. But I love them for that, and need that vibe in my life every couple of months.

I am so not a horror guy but around Halloween I will give some a try just to get into the spirit. Sadly this year I also decided to watch Rattlers for the first time and your assessment of it is spot on! I laughed out loud at the tent scene but by and large it was dreadful.

I have seen the original 13 Ghosts and it wasn't bad. Older horror is my kind of horror, more suspense than gross out gore.

the one with the slasher/murder mystery and the niece and wife conspiring the kill the terrible author (justice for Brenda!!!)

I haven't, but now I'm curious, especially about BEAUTY AND THE BEAST.

I watched SILVER BULLET, CARNIVAL OF SOULS, and the original CAT PEOPLE.