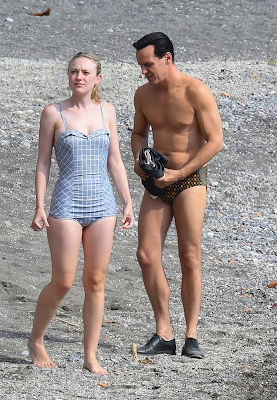 Hello! That's a photo of Andrew Scott playing Tom Ripley opposite Dakota Fanning playing the character of Marge in Showtime's Ripley series, filming right now in Italy (via) -- I told you about this series here. Previously these roles were played by Matt Damon and Gwyneth Paltrow in the 1999 masterpiece The Talented Mr. Ripley, of course, which leads me to this question... 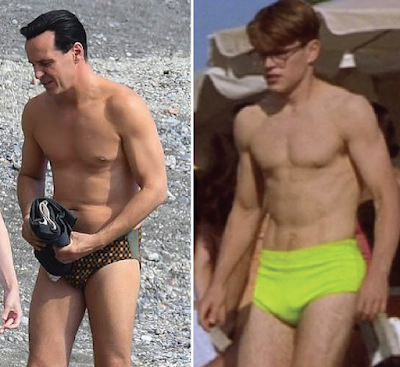 Also in the cast of Ripley is Emma actor Johnny Flynn playing Jude Law's forever-role of Dickie, and we wish him the best of luck with that... I mean I liked him in Emma but this is a big ask. On that note The Daily Mail, where these photos are from, lists the below photo as Dakota "frolicking with a few friends" but do we think that's actually a shot of Johnny below? I cannot tell. 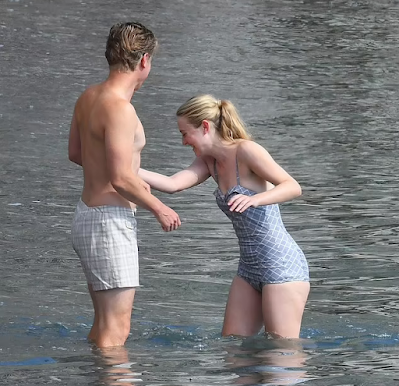 I wonder will they recreate the iconic chess/bath scene.

This feels unfair to Andrew Scott, a very beautiful man.

I guess I never found Matt Damon to be very attractive, so this is easy for me. Wish I could say why, but I've never really understood my hesitance.

I think I blocked out that they are remaking this story. Damon/Law/Paltrow/Blanchett/Hoffman are unbeatable...though I like many of the people in the new cast. Why.

Johnny Flynn played a great David Bowie and was charisma personified in the underrated series, "Lovesick." Opposite this hot version of Scott, this series could be quite something. The original had Jude Law, but none of the other actors screamed passion. Although Jude Law makes up for most things. He made the Pope sexy. But Flynn and Scott? That's a sexy combo.

I love Andrew Scott, but isn't he too old for this? Especially opposite Dakota Fanning. Minghella's film was pretty much perfect, so I don't know.

Andrew Scott is hotter, but that's a problem. Of course, just a photo but Damon looks like a lot more like Ripley should. I'm having trouble believing Andrew Scott has that body and has trouble blending in with a bunch of hot shallow rich kids.

It is utter insanity that Andrew Scott is losing this poll as he is white hot. Matt Damon has only ever been lukewarm at best.

Andrew Scott is sexy full stop and it'll be fun to see that sultriness and warmth he has in play with sociopathic Ripley. That being said I really like Damon in those togs.

Damon for the unglamourously wholesome that he looks utterly uncomfortable in his own skin - which somewhat befits Ripley better than very at home looking Scott.