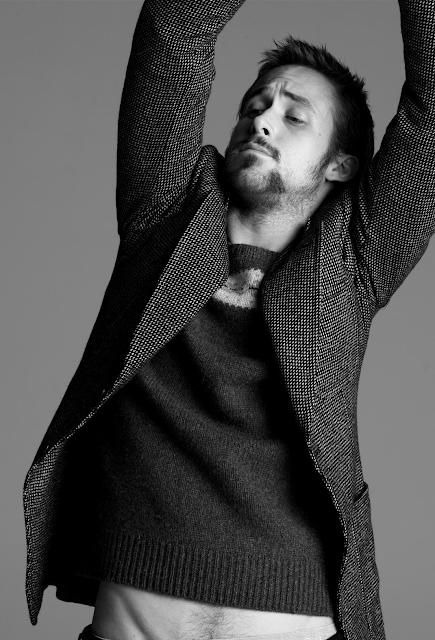 Couple tidbits of Ryan Gosling news that I should make sure make their way here onto the site, even if they're either not earth-shattering exactly or brand new -- hey it gives me a reason to post the above photo, and that's enough. Okay so today's news is that Ryan is re-teaming with The Place Behind the Pines and Blue Valentine director Derek Cianfrance for his previously-announced Wolfman movie -- the news here is that Invisible Man director Leigh Whannell seems to have moved on, or been moved on, although given how successful he was with Invisible Man I'd think the studio would want to keep him happy so I'm guessing the former. Or maybe Gosling wanted the change and has more power. What the fuck do I know? I am just regurgitating news from Deadline so I can share it alongside some happy trail. Anyway Cianfrance hasn't really shown much (read: any) interest in horror before but that could make it interesting in itself. We will see.
The other news, which is several days old now but we're here and we might as well run with it, is that Gosling is in talks to play plastic crotchless Ken in Greta Gerwig's Barbie movie, opposite Margot Robbie. I have no idea what this project is, it has confounded me since Day One, and I'm just gonna put my faith in Greta for now. Being an atheist and all she's the closest I've got to a deity so fingers crossed we don't have a repeat of Time magazine's April 8 1966 cover on our hands. Thoughts on these projects? Or just life in general? How's your knees doing? Tell me something, you.
Who? Jason Adams When? 5:23 PM
Labels: gratuitous, Greta Gerwig, horror, Ryan Gosling

Love your reach-out. Great style even if you do focus on young twinks a bit much. :)

And, of course, no offense intended!
From an aging singing soul with an appreciation.

Ryan Gosling needs to just go do theater or something. Tired of his blandy blahdee dah boringness.