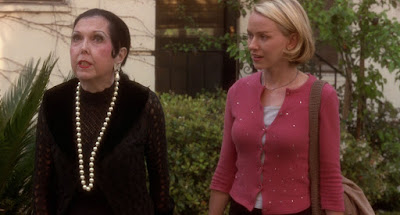 Coco Lenoix: You know, there was a man that lived here
once that had a prize-fighting kangaroo. Well, you just
wouldn't believe what that kangaroo did to this courtyard!

A happy 20 to David Lynch's masterpiece (one of them anyway), released in theaters on this day in the year 2001. Given we were all still in a bit of a state of shock at this point in time in the year 2001 it took some time for everybody to glom onto what a masterpiece this TV-show-turned-movie was, but we're there now, baby, are we ever. Mulholland Drive frequently ranks high up on all-time lists from critics, and I don't disagree...

... although as much as I love it it's not my favorite Lynch -- that honor will forever remain enshrined in the tomb of Blue Velvet. But Mulholland's top five for sure, depending on how we're ranking the Twin Peaks stuff. And it says a lot about its respectability quotient that it's one of the first 4K discs that Criterion will be putting out, in just about one month. Where would you rank Mulholland Drive?

Number 1, for sure (am not counting The Return as a film). My 2 would be Fire Walk With Me, and 3 is either Lost Highway or Blue Velvet.

Favorite Lynch movie by a mile. It's his tenderest, I think.

Off topic, but are we gonna get a cap of Oscar Isaac’s “juicy butt” (as described by Daisy Ridley) from SFaM Ep 5?

"Off topic, but are we gonna get a cap of Oscar Isaac’s “juicy butt”"

I love your commitment, Anon! I will hopefully get to it this week, I keep forgetting. And I haven't caught up with the past episodes, I'd like to actually watch them first! We'll see. It will happen, just so the site has it on the record, but that deliciousness can actually be found out there already...

Thanks for the link man. And happy 20th to Mullholland Drive. This is Lynch’s best. Then Blue Velvet and The Elephant Man.

I love, love, love “Blue Velvet” but “Wild at Heart” and I had a torrid affair in 1990. I worked at a movie theater, had keys to the joint, and I would lock up every night, thread up the print and enjoy it with some adult concessions. I saw it so many times I could quote it backwards. It’s absurdly funny and passionate, features Willem Dafoe as “Bobby Peru” (who likes to fuck like a bunny!), Crispin Glover appears with a cockroach on his anus, it has laugh-out-loud nods to “Wizard of Oz” and is all wrapped up with Laura Palmer appearing as Glenda the Good Witch before Nicholas Cage ends the film happily with a musical number.