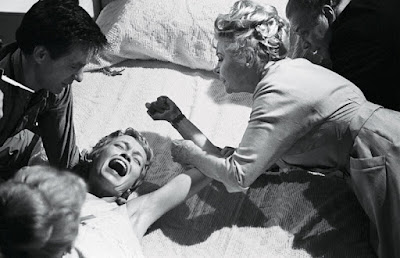 There's really not much of anything in terms of physical violence in Rosemary's Baby -- we do see Terry Gionoffrio's bloodied dead body on the sidewalk after she's leapt out of the Bramford building, but that's after the fact -- it's all emotional and psychological. Maybe that's why the scene where the coven closes in on Rosemary, holds her down on the bed as she flails and shrieks, and inject her with a sedative, does continue to hit so viscerally until this day. It's the only scene where we see Rosemary physically attacked -- such things are hinted at during the demonic rape sequence of course, but the witches were decent enough to feed Rosemary that doped-up chocolate mouse there so that sequence remains hazy, unlike this. Add onto it Rosemary's obvious frailty, so stick-thin with that gigantic pregnant belly heaving to and fro as she convulses, add on Mia Farrow's enormously effective performance, and well this scene stands out to my eye as the scariest single moment in the entire film. 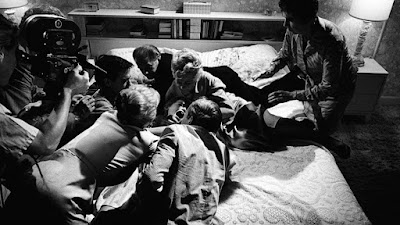 The camera work is really effective too and then how Dr Sapirstein steps in and grabs the baby through Rosemary’s stomach looks so awful. Such a great ending to a sequence that starts with the possibility that Rosemary might actually escape. Yeah, right.

Yup, that scene is, for me, one of the most impactful scenes ever filmed. Every time I watch it, I want to believe that Rosemary won't be betrayed -- that she'll get away -- and then I'm reminded what she is carrying and how f&*^ed she already is. It's just so so so good.