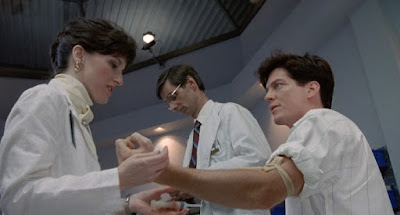 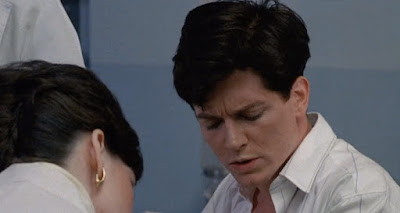 I haven't seen The Fly II (1989) in years but there are two bits of violence from it that I don't think I will ever forget -- there's the elevator coming down on the man's head and exploding it like an overripe melon, which -- grody! And then there is this little moment from early in the film where this asshole nurse breaks a needle off in Eric Stoltz's arm while she's taking blood and that spray of blood shoots out of the broken piece. I'm generally not scared of needles -- which has made this year's "13 Needles of Halloween" series one of my least personally frightening (get back to me if I ever do spiders) -- but this scene made me reconsider that stance. The Fly II, even though as I said I haven't seen it in years, struck me at the time as being better than any un-Cronenberg Cronenberg sequel should've been. Any fans? Oh and in case you were wondering that awful nurse gets what's coming to her!

It's a silly creature feature come the end up till then interesting but still very enjoyable.